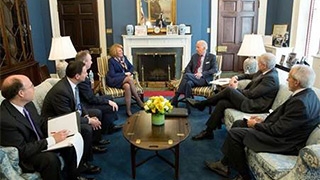 During President Barack Obama’s State of the Union Address in January, he announced a new effort led by Vice President Joseph Biden to fight cancer.

On April 11, representatives from The Children's Hospital of Philadelphia met with Biden and his staff about the “Cancer Moonshot Initiative” and the inclusion of children in the research.

Madeline Bell, CHOP president and CEO, encouraged the federal government to have a larger role in facilitating research collaboration via data sharing, drug development for children and adolescents with cancer, research into secondary conditions resulting from cancer treatment, and ensuring that the nursing workforce meets the needs of patients.