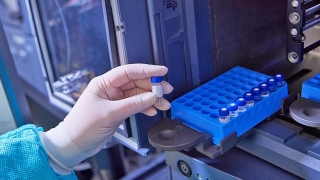 Researchers at Children’s Hospital of Philadelphia (CHOP) have identified a novel mechanism by which adenovirus hijacks post-translational modification of host proteins, allowing the virus to replicate efficiently in host cells. The findings, which elucidate how adenovirus alters host protein-RNA binding to promote the production of viral RNA, were published today in Nature Microbiology.

One way viruses promote infection is through ubiquitination, an enzymatic post-translational modification in which a ubiquitin protein is attached to a substrate protein. Ubiquitin acts as a sort of marker, either targeting the protein for degradation or affecting the protein’s activity in other ways, such as promoting or preventing protein interactions. Viruses usurp the host’s ubiquitin machinery, using the process to promote virus production and subdue host defenses.

Adenovirus encodes two proteins, E1B55K and E4orf6, that work together to co-opt the host’s ubiquitin machinery for the virus’s own gain. Adenovirus manipulation of ubiquitination is particularly important for efficient production of viral RNA. Previous research had only identified host targets that were marked for destruction during infection, and none of these substrates was linked to RNA processing. However, CHOP researchers identified two substrates of viral-mediated ubiquitination that aid the processing of viral RNA but that surprisingly do not degrade when ubiquitinated in the midst of adenovirus infection. These RNA-binding proteins, RALY and hnRNP-C, seem to play a role in slowing the production of virus by binding to viral RNA. Ubiquitination during adenovirus infection blocks their interaction with viral RNA, and so the virus is able to replicate faster and more efficiently.

“These findings reveal a quicker way that viruses can take over host processes without degrading host proteins,” said Matthew D. Weitzman, PhD, an investigator in the Department of Pathology and Laboratory Medicine at CHOP. “We are also beginning to understand ubiquitin’s role in regulating RNA splicing, so further research that analyzes host splicing changes during adenovirus infection may provide insights into host pathways altered by the ubiquitination of RNA-binding proteins.”

You can read more about the study here.