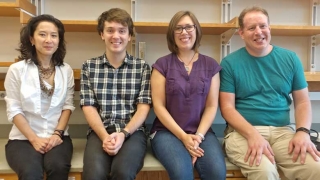 Margaret Chou, PhD (left) and Ian Henrich, PhD (second from left) won a $200,000 award from the Science Center to develop a novel therapeutic for AML. Cancer researchers at Children’s Hospital of Philadelphia have won $200,000 from the Science Center, a nonprofit organization in Philadelphia that supports innovation and entrepreneurship. The award will fund one year of research to develop a commercially viable novel immunotherapeutic agent to treat acute myeloid leukemia (AML), an aggressive cancer that affects both children and adults.

“We will use nanoparticle technology to jumpstart the immune system,” said Dr. Margaret Chou, PhD, a cancer researcher at CHOP and an Associate Professor of Pathology and Laboratory Medicine in the Perelman School of Medicine at the University of Pennsylvania. “Our nanoparticles are designed to specifically target AML cells, causing them to draw in and activate immune cells so that they can eradicate the cancer.”

The focal point of the researchers’ novel therapeutic is a protein called USP6, which Dr. Chou has studied for almost two decades. Her lab has investigated USP6's functions in the context of benign tumors and sought to understand why these tumors never progress to full-blown cancer. This led the research team to discover that USP6 triggers a potent and multi-faceted activation of the immune system. They speculate that this multi-pronged immune attack is why USP6 is so effective at preventing benign tumors from growing out of control and spreading throughout the body.

Dr. Chou compared the immune system to the military, which has multiple branches, from the army to the navy to the air force. Existing immunotherapies, such as CAR-T cells or checkpoint inhibitors, would be akin to deploying only a navy ship; in contrast, USP6 would act like deploying all branches of the military at once in a coordinated attack. To date, Dr. Chou’s group is the only laboratory that has recognized the immunotherapeutic potential of USP6.

Agents that can mount such a multi-pronged immune attack could represent the future of immunotherapy. While CAR-T cells and checkpoint inhibitors have led to astounding cures and remissions, in actuality only a small percentage of patients have benefited from them. Furthermore, those who do respond often relapse because the cancer cells develop resistance to these therapies since they only act on a single target.

Cancer cells would be less likely to develop resistance to USP6-based therapy since it targets multiple immune pathways simultaneously. In addition, Dr. Chou’s team speculates that USP6 nanoparticles could potentially boost the effectiveness of CAR-T cells and checkpoint inhibitors.

“Not only do we envision that USP6 nanoparticles could act as an effective agent by itself, but we also predict that it would greatly increase the number of patients who could respond to these other immunotherapies,” said Dr. Ian Henrich, a post-doctoral researcher in Chou’s lab and lead investigator on the award.

Continuing with the military analogy, CAR-T cells would be like a navy ship that cannot dock to mount its attack. USP6 would clear the way so that the ship could dock, and it would also strengthen the fleet so that when the ship docks, it swiftly defeats the enemy – in this case, cancer cells.

The one-year award is part of the Science Center’s QED program, which provides funding and business advice to academic researchers in order to help them commercialize promising but unproven technologies.

At the end of the QED period, the team hopes to demonstrate proof-of-concept, and to ultimately have their USP6 nanoparticles tested in clinical trials in humans.

“A year from now, we hope to have in hand a nanoparticle delivering USP6 that is targeted specifically to AML cancer cells, and demonstrate that it eradicates tumors in animal models,” Dr. Chou said.