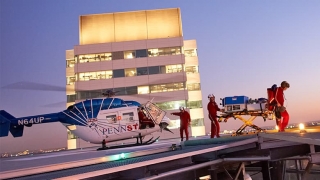 CHOP’s Transport Team is made up of medical superheroes. Always at the ready (24 hours a day, seven days a week, 365 days a year), this team rescues critically ill and injured children by land and sky and delivers them to the arms of experts at CHOP.

“We teach and learn from one another on a daily basis, and that in itself is one of the best things about our team,” says Clinical Nurse Crystal MacDonald, BSN, RN, PHRN, CEN.

Patients are transported to CHOP because of the hospital’s specially trained staff, facilities and equipment available to care for seriously ill and injured pediatric patients. Some just need an overnight stay at the hospital for a one-off concern. For others, transport initiates a lifelong relationship with CHOP for care of things like viral illnesses, asthma, prematurity, congenital defects, cardiac defects, and cancer.

Preparing for every possibility

Before leaving CHOP to pick up a patient, the Transport Team holds a safety huddle to plan for anything that might occur during the trip — such as a critical emergency. Then, when they arrive on site, the team assesses the child, takes down clinical information, discusses the management with a CHOP physician, helps them onto a stretcher and heads back to CHOP. In addition to a child’s medical emergency, the team also must prepare for other hard-to-control variables, such as traffic and weather conditions.

For example, the team had to transport a little girl who was attacked by her dog in the middle of a winter snow storm. Not only did the team have to manage the child’s critical condition while on the way to CHOP, they had to do so while navigating through harsh winter weather.

“Fortunately, we were able to get the child to CHOP in time for life-saving surgery,” says Sergey S. Tseona, BS, RRT-NPS, a registered respiratory therapist on the team.

Parents play a key but often overlooked role during pediatric emergency transports. The Transport Team recognizes this and empowers parents to contribute to their child’s care as much as possible during transport. Parents are encouraged to ride with their child, help keep them calm, and share insight that might help guide the child’s care.

In addition to the clinical care required by the child, care of the parent is also crucial. Parental anxiety can be understandably high. The Transport Team works to assuage their fears by listening to their concerns, answering their questions, keeping them informed of the child’s status, and explaining what to expect when they arrive at CHOP.

MacDonald recalls transporting a 3-year-old who had a fever and was experiencing multiple seizures back-to-back. The child’s condition was so critical that he needed to be transported by helicopter. The child’s mother was beside herself, crying hysterically. MacDonald spoke with her, hugged her and calmed her down. For the entire flight, during moments when she was not providing direct care to the child, MacDonald held the mother’s hand and comforted her.

“I let her know that we see and feel her emotions, too,” says Crystal. “Because in that moment, her son needed her and she needed us.”

What you should know

If your child ever happens to be in an emergency transport situation, the CHOP Transport team wants parents to always remember:

Learn more about our Transport team.