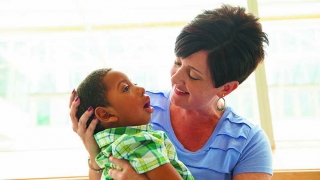 At only 3 years old, Bryon Siverain has already had more major surgeries than most people have in a lifetime. He has also come farther than most to get to CHOP — all the way from the Republic of Haiti.

Bryon was abandoned in the small Caribbean country as a baby and rescued by a mission, which sent him to the U.S. on a special medical visa. His most urgent health concern seemed to be his clubfeet, but it was soon clear he had several other serious health issues requiring more medical care than the mission could afford.

As a succession of families took care of him, one posted a picture of the 10-week-old boy on Facebook, where it caught the attention of Nancy Tate.

Nancy and her husband, Kelley, already had three kids of their own — now all teenagers — but they had always planned to adopt another child one day. So when they learned about Bryon and his situation, they decided they wanted to make him part of their family.

“We just felt like we were called to do it. We both agreed, ‘We can help him. Let’s take him,’” Nancy says.

The Tates became Bryon’s temporary guardians in November 2011. As soon as they brought him home to Philadelphia, their first stop was the International Adoption Health Program at CHOP, which helps families adjust to new adoptions — particularly children like Bryon with special healthcare needs.

Susan Friedman, MD, the Wawa Endowed Chair in International Adoption, and her team evaluated him and prepared the Tates for the challenges they would face. And they were many. There were signs that the orphan had been abused, including a broken leg that had healed poorly and would need a series of orthopedic surgeries to fix. He was also suffering from cerebral palsy, visual impairment, malnutrition, and problems breathing and eating.

It was a lot for any new caregiver to handle, even seasoned parents like Nancy and Kelley. Friedman connected the family with the Integrated Care Service (ICS), a team that coordinates care for inpatients who are medically complex and fall under multiple specialty areas at CHOP.

That’s how the Tates met Annique Hogan, MD, medical director of ICS as well as Complex Care in the Patrick S. Pasquariello Jr., MD, Diagnostic and Complex Care Center. Pasquariello and Mark Magnusson, MD, PhD, founded the center more than 20 years ago to meet the needs of patients with difficult-to-diagnose illnesses.

In 2009, funds raised through the annual Daisy Day Luncheon allowed the center to hire a nurse coordinator, Danielle Flynn, MS, CPN, and formally expand its focus to care for medically complex patients.

“The most common thing I hear is parents feeling overwhelmed,” Hogan says. “They’re not really sure who’s captaining their ship.” Fortunately, Hogan and Flynn are adept at navigating difficult medical waters.

The first order of business was surgery to clear Bryon’s airway, and they inserted a feeding tube so that he could eat and get his weight up. Only when he could breathe and eat could they plan to address his many other issues. That’s where Complex Care took over.

Complex Care continues the mission of ICS but as an outpatient follow-up — coordinating patient care after the family has left the Hospital. They discuss a long-term-care plan with the family that prioritizes the patient’s multiple issues, manages medication, and helps schedule treatments and follow-ups with different areas at CHOP.

“Dr. Hogan has been a godsend to me, because we’ve got this little bundle and we’re like, ‘Ah! What do we do with this kid?’” Nancy says. “She and Danielle do everything in their power to be there for you and not leave parents on the hook to figure out the medical system on their own.”

Ironically, the problem that brought Bryon to the U.S., his clubfeet, has been the last priority in his medical care. After a whopping nine surgeries (with one more yet to come) to fix his legs, feet and hips, he still has trouble with breathing and eating, but he’s also getting stronger, healthier and happier every day.

“He coos to us and he smiles, and he laughs when you tickle him. He didn’t do any of that before,” Nancy says. She and Kelley are currently working with the Haitian government to formally adopt Bryon.

“It’s been a lot bigger than we thought, but life-changing for all of us, to put somebody ahead of ourselves,” says Nancy. “Bryon doesn’t say anything, but he totally knows we’re his family and we’ve got him.”