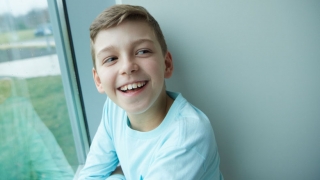 Noah took part in a clinical trial at CHOP for a therapy to treat peanut allergies. He can now safely eat the equivalent of 18 peanuts. Noah was 6 years old when he ate a piece of candy containing peanuts. His allergic reaction was swift and intense: coughing, trouble breathing, puffy eyes and a swollen face. His mom gave him Benadryl, and Noah recovered. But the terrifying experience left its mark on the family.

Then they discovered a cutting-edge new therapy at Children's Hospital of Philadelphia (CHOP) with the potential to erase their fears.

Noah participated in the clinical trial for PalforziaTM, a new oral immunotherapy recently approved by the U.S. Food and Drug Administration to treat children with peanut allergies. The medication, which involves a daily controlled amount of peanut protein, was designed to desensitize children and reduce the severity of allergic reactions, some of which can be life-threatening. The medication is a first-of-its-kind treatment.

“This therapy is a game-changer for children and teens with peanut allergies,” says Jonathan Spergel, MD, PhD, Section Chief of CHOP's Food Allergy Center. “While it’s not a cure, it will allow patients to live their lives without constant fear of having a serious or fatal reaction to accidently ingesting peanut protein.”

The therapy’s path to FDA approval began with clinical trials at CHOP and a handful of hospitals around the country, as well as partnerships with drug manufacturers and the participation of hundreds of patients and families. Generous gifts helped fund the work — including $250,000 from Susan and Don Wenger and $25,000 from Anne Kennedy, donors dedicated to supporting food allergy research.

Patients were divided into two groups; one received the peanut protein, the other a placebo. Participants didn't know which group they were in. After two years, the study was deemed a success: Around 70% of children receiving the peanut protein daily reduced their sensitivity to the food.

Noah had been in the placebo group, so after the results were known, he began receiving the active medication in 2018. At first, his body reacted to even small amounts of peanut protein in the medication, but Noah persisted. After a year, he was able to tolerate eating the equivalent of 18 peanuts without a significant allergic reaction.

Today, 12-year-old Noah is an active athlete. He takes a maintenance dose of Palforzia, but no longer worries about small accidental exposures.

"Oral immunotherapy won't work for everyone, but when it does, it's amazing," says Terri F. Brown-Whitehorn, MD, attending physician in CHOP’s Food Allergy Center. "It can transform a child's life."