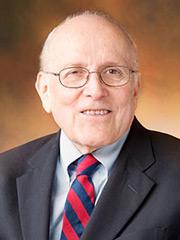 Steven D. Douglas, MD, chief of the Section of Immunology at The Children’s Hospital of Philadelphia, delivered the Paradigm Builder Lecture to the International Society for NeuroVirology (ISNV) on June 4, in San Diego. The Society’s Lectureship Award recognizes a leading investigator for a systematic body of scientific research in neurovirology.

The Award recognizes Douglas’s 40 years of seminal and continuous work in the biology of immune cells, with particular relevance to potential treatment for HIV infection. His research has encompassed basic studies of cell biology, identification of mechanisms of HIV infection, and conducting clinical trials in HIV-infected patients.

The Paradigm Builder Lectureship specifically highlights “the establishment of well-defined scientific frameworks within which theories, laws, generalizations, and supporting experiments are formulated and planned.”

In a statement on its website, the ISNV says that “Dr. Douglas has been in the forefront of research in immunology.” For the past 35 years, he has been at The Children’s Hospital of Philadelphia (CHOP) and at the University of Pennsylvania, where he is a professor of Pediatrics in the Perelman School of Medicine.

Starting in the late 1970s, Douglas established laboratory methods for investigating two types of immune cells: monoctyes and macrophages. Those cell culture methods have helped enable laboratory research throughout the world. Douglas was among the first scientists to discover that HIV-1 infects macrophages derived from monocytes. He first showed that an important chemical, substance P, exists on these cells, and that it plays a crucial role in neurological manifestations of AIDS.

He then identified a pathway shared by substance P and a particular cell receptor as a potential target for treating HIV infection.

Douglas has received continuous research funding for the past four decades from various centers within the National Institutes of Health. Currently, he is collaborating with co-investigators from Temple University in a joint $4.3 million NeuroAIDS grant from the National Institute of Mental Health. This grant funds research on new methods to eradicate HIV that lurks in brain cells despite conventional antiviral treatments.

The Paradigm Lectureship Award citation notes that “Dr. Douglas’s research has intersected the disciplines of psychiatry, immunology, neurology and AIDS.” Although Douglas’s previous honors, research publications and memberships on scientific committees are too numerous to mention, he currently serves as a member of the Scientific Oversight Leadership Committee for the International Maternal Pediatric Adolescent AIDS Clinical Trials (IMPAACT).

Douglas is the seventh scientist to receive the Paradigm Lectureship Award, established in 2006. As part of the Award he delivered a lecture to the 13th annual ISNV Symposium.