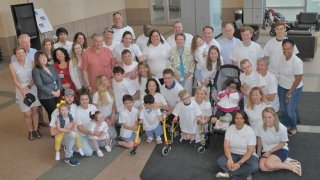 At that time, three patients worldwide had been identified, all of them living within a 200-mile radius of CHOP’s Main Campus in Philadelphia.

Four years later, that number of patients has quintupled to 15, and nine of those patients and their families gathered in Philadelphia on July 13, 2019, in the same building where the causative gene was discovered, for a special event aimed at discussing the condition, meeting and bonding with other families who were on the same medical journey, consulting with a team of specialists for each of the major symptoms of CHOPS Syndrome, and spending some free time enjoying the City of Brotherly Love. 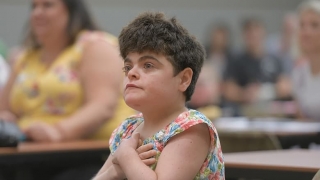 Leta Moseley, 21, watches one of the speakers at the CHOPS Syndrome symposium. She was one of the first patients diagnosed with this condition. “It felt like a dream being able to meet every one of you in person,” said Lainey Moseley, the mother of 21-year-old Leta, one of the first three patients identified. Since Leta’s official diagnosis, Lainey has kept a blog about her family’s journey, which in turn has allowed her to connect with families who have received the same diagnosis and are looking for more information and support.

For Leta’s family, their journey had been a “diagnostic odyssey,” a quest to find the cause of these symptoms — in this case, a master regulator gene called AFF4 that plays a critical role in human development. Through Leta and the other patients who helped the team of geneticists led by Ian Krantz, MD, Co-director of the Roberts Individualized Medical Genetics Center (IMGC) at CHOP, to properly identify the condition, other families could get answers.

“When we were struggling to figure out what was going on with Leta, we were in the ‘dark ages’ of genetic research,” Lainey said. “Now, an event like this seems surreal. I’m getting to finally meet families that I have known online for years in person, and we know that we’re not alone.”

One such patient is Alexander Glidden, a 27-year-old from Adelaide, Australia, and the oldest patient that has been identified with CHOPS Syndrome so far.

Alex’s family geneticist had seen the paper from Krantz’s group and believed that it might finally provide the answers. The results came back and Alex was formally diagnosed later in 2015.

“We finally had an answer,” said his mother Jenny Watts, who traveled with Alex and their family to Philadelphia for this special event. “It didn’t really change things initially, but we’re always learning more. Alex has pulmonary issues, so we want to make sure we’re monitoring him and learning what treatments and interventions are available.”

Jakob Engley, 7, and his mother Dani McLennam, also traveled from Australia for this event.

“When he was born, he arrived small, so he’s been undergoing genetic testing since day one,” Dani recalled. In 2016, shortly after switching their geneticist, the family received the diagnosis of CHOPS Syndrome.

“It’s a huge relief knowing what he has and being able to interact with other families and sharing what we’re all experiencing,” Dani added.

Many of the families remarked on how important social media has been at allowing the small number of families faced with this rare genetic condition to connect with one another and share important information and find support from people who understand what they are going through better than anyone else.

In addition to hearing from experts in gastroenterology, cardiology, pulmonology, and child development — all areas impacting patients with CHOPS Syndrome — the families also had individual consultations and discussed their experiences with the experts. While the event was meant to provide education and resources to families, with so few patients diagnosed so far, researchers are eager to study these patients and learn how they are individually affected by this condition.

“We have some information for you, but we really learn so much more from you and your experience,” Krantz told the families at the event. 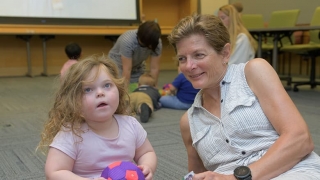 Madison Balon, 5, spends time with CHOP behavioral pediatrician Dr. Mary Pipan. While no specific treatment for CHOPS Syndrome is currently available and doctors manage symptoms, Krantz and others are learning more about the gene mutation and how it specifically affects patients. Knowing the appropriate underlying cause has allowed clinicians and geneticists to appropriately counsel families about recurrence risk for future pregnancies and to provide a prenatal test if desired. As more children are identified, researchers can better understand the impact on their health.

Currently, Kosuke Izumi, MD, PhD, an attending physician in the RIMGC and the Division of Human Genetics at CHOP and first author of the landmark 2015 paper, is studying how changes in the AFF4 gene affect clinical and developmental features. He is also developing cellular and animal models that will help researchers understand the way cells turn on and off genes all over the genome during embryonic development. This information could potentially lead to new treatment options for these children, including the possibility of new gene therapies.

“Just seeing the happiness and excitement amongst the families meeting other families with the same diagnosis for the first time at this meeting underscored the importance of these breakthroughs for the individual families beyond the future hope of better therapies and treatment,” Krantz said.