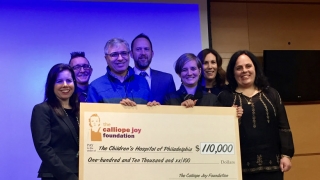 Maria Kefalas and Pat Carr, and Matt and Lauren Hammond, two families affected by leukodystrophy, presented a check of $110,000 on behalf of The Calliope Joy Foundation to Children’s Hospital of Philadelphia (CHOP) at the Loie Hammond Memorial Lectureship held on January 25, 2018. The funds will support CHOP’s Leukodystrophy Center, as well as significant research that may one day lead to treatments in leukodystrophy and other similar disorders.

“The Children’s Hospital of Philadelphia’s Leukodystrophy Center is one of a handful of centers in the nation that brings together a multidisciplinary group of caregivers to provide cutting-edge, comprehensive diagnostic testing, clinical care, and the most advanced treatment to infants and children with inherited white matter disease,” says Amy Waldman, MD, medical director of the Leukodystrophy Center. “We have built an incredible team, which would not have been possible without the generosity of the Carr-Kefalases and Hammonds. Their donation will help power innovative treatments and breakthrough research.”

Leukodystrophies are inherited disorders of the white matter of the brain and spinal cord that can cause problems with movement, speaking, vision, hearing, and overall development. These disorders are difficult to recognize and diagnose. The Leukodystrophy Center at CHOP provides comprehensive clinical care, diagnostic testing and the most advanced treatments available to infants, children and adolescents living with these diseases.

In June 2012, the Carr-Kefalases received heartbreaking news that their daughter, Calliope Joy, also known as Cal, had late infantile onset metachromatic leukodystrophy (MLD). On Christmas Eve 2012, the Hammonds also got a tragic phone call that their daughter, Loie, had MLD. Though the families lived just 20 miles away from one another, they would not meet until two years later, when the Hammonds attended a fundraising event benefiting The Calliope Joy Foundation.

The Calliope Joy Foundation was founded by the Carr-Kefalases to honor Cal and help support children living with leukodystrophy through improved care, research and family support.

“For too long, Leukodystrophy patient families left the doctor's office with the message ‘go home and enjoy the time you have left.’ However, at CHOP, a family is told ‘we are going to give your child the best quality of life possible and we are working to get you new treatments,’” says Maria Kefalas. “The most important thing CHOP provides is the pledge that they will be here for you every step of the way and that you are not alone in this. That's what means the most; that's what we work so hard to support. That's why we made this gift.”

The Carr-Kefalases and Hammonds have raised thousands of dollars, hosting fundraising events and cupcake sales throughout the years, and have generously donated the proceeds to CHOP and the Leukodystrophy Center. In January 2016, on the second anniversary of Loie’s death, CHOP created the Loie Hammond Memorial Lectureship.

“Loie would be so proud of what has been accomplished in such a short time period for other children and families affected by this terrible disease,” says Matt and Lauren Hammond. “However, we are not done yet, and quite frankly, we have just begun. Knowing that this kind of research is underway, in a small part due to the efforts of Cal and Loie, make all of the sacrifices to-date that much more bearable.”