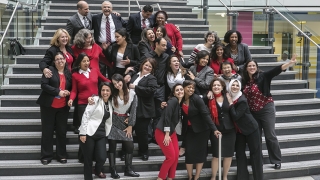 After complex spinal surgery, it was the moment of truth for the 14-year-old patient. The anesthesiologist lifted her from sleep into a minimally conscious state. A man put his finger into the palm of the girl’s hand and called her name.

“If you can hear me,” he said, “squeeze my finger.” She squeezed.

“You are in surgery,” he continued. “There is a breathing tube in your mouth, so don’t try to talk. Just follow my instructions.” Under his direction, she wiggled her toes and moved her feet. The surgeons smiled under their masks. The girl’s nerves were intact, and the surgery was a success.

But one thing was unique about that conversation: It was in Arabic, a language that none of the surgical staff could speak.

That day, they spoke through Zaed Sadoon, one of 23 staff interpreters at The Children's Hospital of Philadelphia — 10 for Arabic, 12 for Spanish and one for Mandarin and Cantonese. Together, these four languages encompass 80 percent of the demand for interpreters at the Hospital.

The services of staff interpreters — and outside interpreters who are needed for 71 other languages — are used more than 6,000 times every month across CHOP’s 50-plus locations.

To English-speaking families, interpreters are almost invisible. But for those with limited English, including the 538 families who came to CHOP from abroad last year through International Patient Services, and the clinicians who care for them, Language Services is essential.

What is it like to serve as a connection between medical experts and worried families? We shadowed several interpreters to find out.

Abigail Orozco, who has been interpreting at CHOP for nine years, makes her way to the inpatient pulmonology unit to help a nurse complete registration paperwork for a Spanish-speaking patient. Orozco earned a chemistry degree in her native Mexico, but there is no typical background for an interpreter.

The current team also includes a sound engineer, a dentist, an accountant, a biologist, a teacher, a journalist and three who were physicians in their native countries. All have completed specialized interpreter training courses and passed a language proficiency test. The majority, like Orozco, also have passed a national certification exam.

The interpreters must translate everything a family or staff member says as accurately as possible, omitting nothing. While Orozco goes back and forth between nurse and mother with questions like, “Does the child have any allergies?” she also translates to English as the mother tells her energy-filled 4-year-old to take her fingers out of her mouth.

“You want both sides to know you’re not filtering information,” says Orozco.

Ohaila Mustafa spends her morning in the inpatient oncology unit, moving among three Arabic-speaking patient families. Clinicians summon her by phone, or see her in the hallway and ask for her assistance. In the span of 30 minutes, she interprets for several doctors and nurses, as well as a social worker and a nutritionist. Typically, the clinician, interpreter and patient family stand in a triangle, with the clinician pausing frequently to wait for the translation.

The interpreters often make important safety catches, like when a mother whose child was about to have sedation assured the nurse that her child had only clear liquids that morning: apple juice and grape juice.

The nurse moved on, but Mustafa paused to clarify. While white grape juice is considered a clear liquid, purple is not. The mother lifted up a bottle of dark, opaque juice — not safe to consume before sedation — and so the procedure had to be postponed.

Back at the Language Services office, coordinator Sofia Cummings has scheduled interpreters in Burmese, Bengali, Mandarin, Cantonese, Japanese, Arabic, Swahili and American Sign Language, all before lunch. For the languages not spoken by a staff interpreter, or if one is not available, outside agencies will send an interpreter or provide one by telephone.

At 2 p.m., Ibrahim Amer, who was a doctor in his native Egypt, interprets as a nurse teaches a couple how to insert a feeding tube through their infant’s nose. The father speaks English well, often responding to the nurse directly, but the mother’s English is limited. Amer’s presence ensures that CHOP staff and the family understand each other fully and correctly. Even people with good English skills often need help translating medical terminology.

After the meeting, the father approaches Amer with another question: Where can he go to pray? Interpreters also bridge cultural gaps. Earlier in the day, another interpreter helped a parent understand paperwork sent home by a child’s Philadelphia school.

“Staff interpreters serve as cultural brokers,” says Gabriela Jenicek, manager of Language Services and Spiritual Care, who leads the team. “And the communication goes both ways. For example, when the medical staff prepares to deliver bad news, often an interpreter who knows the patient’s culture can prepare them for the types of questions and concerns a family might have.”

“We know every single corner of the Hospital,” says Orozco. “We’ve interpreted for medical records in the basement, doctors on the 12th floor and everywhere in between. We make communication happen.”