Researchers have taken a significant step forward in developing gene therapy against a fatal neurodegenerative disease that strikes children. By delivering a working version of a gene to produce a key enzyme that is lacking in Batten disease, the scientists delayed symptoms and extended lifespan in dogs with a comparable disease. 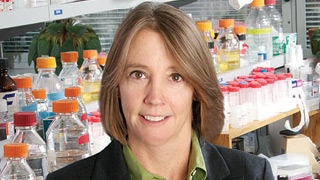 “One treatment of gene therapy gave these dogs a remarkable improvement in their quality of life,” said Beverly L. Davidson, PhD, director of the Raymond G. Perelman Center for Cellular and Molecular Therapeutics at The Children’s Hospital of Philadelphia. “If the outcome is equally profound in children with the same enzyme deficiency, this would represent a great benefit for affected children and their families.”

In most children with the late infantile form of Batten disease and the affected dogs, mutations in the TPP1 gene disable the body’s ability to produce the enzyme tripeptidyl peptidase 1 (TPP1), which normally allows brain cells to recycle cellular waste. The abnormal waste buildup erodes toddlers’ abilities to walk, talk, think, and see. Symptoms and seizures usually appear between ages 2 and 4, and the disease progresses, with most children dying by age 10.

In lysosomal storage diseases that affect other organs such as liver or muscle, doctors treat patients with repeated infusions of the missing enzyme into blood vessels, but infusion into vessels will not work when brain tissue is involved, as in Batten disease. Instead, direct infusions into the brain would be required. Indeed, there currently is an experimental therapy testing whether twice-monthly infusions of enzyme into the brains of TPP1-deficient children impacts the disease course.

In this study, Davidson and colleagues used a non-disease-causing adeno-associated virus to deliver the corrective gene into specialized cells in the dogs’ brains. The researchers delivered the virus once at 3 months of age. The specialized cells secreted the enzyme (TPP1) encoded by the gene into the cerebrospinal fluid around the brain for the months that followed the one-time treatment.

The enzyme spread throughout the dogs’ brains, and the researchers measured evidence of its expression in cerebrospinal fluid for months. The dogs showed striking clinical improvements. Compared to untreated control dogs affected by the disease, the treated dogs walked with a more normal gait, navigated a maze, and better interacted with other dogs. Although the dogs were not cured, their disease progression and cognitive decline were slowed, and they had longer lifespans.

If this gene therapy approach can achieve comparable results in children, said Davidson, it would greatly improve their quality of life. In addition to improvements in motor control and cognition, it could reduce patient risk by avoiding repeated access to the brain for life-long enzyme infusions or the need for implanted enzyme-delivery devices.

Funds from the National Institutes of Health (grants NS068099, NSR077516, EY023968), the Batten Disease Support and Research Association, Jasper Against Batten Fund at Partnership for Cures and Blake’s Purpose Foundation, and the Roy Carver Trust supported this research. In addition to her CHOP position, Davidson is on the faculty of the Perelman School of Medicine at the University of Pennsylvania. Co-authors from the University of Missouri, Columbia, participated in the study and provided the dogs used in the research.