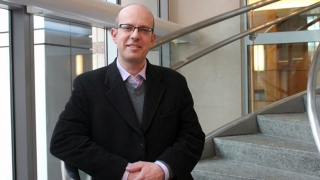 “Our finding has great clinical relevance for patients with factor VII deficiency,” said study leader Paris Margaritis, DPhil, a hematology researcher at the Raymond G. Perelman Center for Cellular and Molecular Therapeutics (CCMT) at The Children’s Hospital of Philadelphia (CHOP). “These dogs have the type of mutation found in the majority of patients with this disorder, so this approach could lead to a sustained gene therapy in people.”

The Margaritis team collaborated with University of North Carolina (UNC) scientists, led by Tim Nichols, MD, professor of Medicine and Pathology at the UNC School of Medicine.

Factor VII (FVII) deficiency has a range of severity, with about 40 percent of patients having severe disease. They are most commonly treated with regular infusions of clotting factor. Unlike hemophilia, a better-known bleeding disorder that predominantly affects males, factor VII deficiency strikes males and females equally.

Gene therapy proposed for bleeding disorders involves introducing DNA carrying the code to produce the specific clotting factor lacking in patients. Researchers at CHOP and elsewhere have bioengineered an adeno-associated virus (AAV), which does not cause disease, as a vector to deliver DNA into cells where it can express enough factor to make the blood clot normally. Over the past 15 years, CHOP hematology researchers have performed clinical trials of gene therapy for hemophilia B that have helped define efficacy and dosing levels in humans.

The CCMT at CHOP houses a clinical-grade laboratory that manufactures gene therapy vectors, including the AAV vectors used in the current study. Margaritis, a member of the CHOP group long engaged in hemophilia research, currently leads a laboratory focused on factor VII deficiency as well as hemophilia.

“We developed a unique animal model of this disease after identifying dogs with naturally occurring factor VII deficiency,” said Margaritis. “Our investigations enabled us to design the corrective gene to insert into our virus vector in the current study.”

The CHOP team collaborated with scientists at UNC who have a long-established colony of dogs for hematology research. Based on previous work by Margaritis, the UNC team identified dogs for this gene therapy study.

The treated dogs had expressed levels of clotting factor VII that would be therapeutic in humans, with long-term stability. In one dog, the effects persisted nearly three years. Based on kidney function, liver function, and blood measurements in the dogs, the treatment was safe, and did not elicit unwanted immune responses.

The current study sets the stage for clinical trials in humans. This gene therapy may especially benefit young children with severe bleeding from factor VII deficiency, such as patients receiving care in CHOP’s hematology program.

“This work is very exciting and promising,” said Nichols, who added, “The FVII-deficient dogs tolerated the initial gene therapy infusions very well and have had no adverse side effects over several years of follow up. In other related studies in dogs with hemophilia B, similar positive findings have translated to people with hemophilia B.” Both Nichols and Margaritis agreed: “The table is now set to propose clinical trials that would treat people who suffer from FVII deficiency.”

The National Institutes of Health (grants HL064190 and HL63098), the Howard Hughes Medical Institute and the Pennsylvania Department of Health supported this study. In addition to his CHOP position, Margaritis is a faculty member at the Perelman School of Medicine at the University of Pennsylvania.