“I wanted to donate to something really worthwhile, something that I knew all about.” That’s how Jacqueline Wottrich — a donor to Children’s Hospital of Philadelphia for almost 60 years — describes her and her family’s motivation for their most recent generous gift. 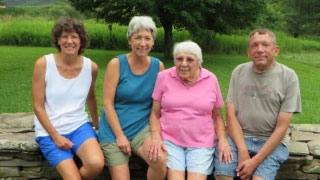 When Jacqueline’s son Jonathan, known as Jon, was born with a life-threatening birth defect in 1957, he was immediately rushed to CHOP from central Pennsylvania. A rare, revolutionary surgery he had at CHOP to reconstruct the organs in his lower pelvis saved his life, and he continued to receive follow-up care from his surgeon, the esteemed C. Everett Koop, MD, throughout childhood and adolescence. Jon went on to become a successful engineer and an avid hiker.

Finding the meaning of family support

In 2016, Jon died at 58 after a battle with cancer. He had previously made arrangements during his estate planning to gift a portion of his retirement account to CHOP. CHOP worked with his mother and sisters to determine how to best use Jon’s gift to honor him and his family.

The family connected with the idea of easing the stress and burden of caring for a sick relative, which presents many hardships and exacts a heavy emotional toll. They chose to establish an endowed fund for patient and family services — giving aid and comfort to those who travel long distances, face extended stays and might not be able to afford care.

Jacqueline also decided to add to the fund with a multi-year pledge of her own. Jon’s memory now lives on at CHOP through the Jonathan Wottrich Endowed Family Support Fund, a multi-generational investment and a meaningful way to honor the memory of a beloved son, brother, uncle and friend. As an endowment, the fund will be a permanent fixture at CHOP — supporting families and honoring Jon in perpetuity.

Learn more about donating to CHOP, including your retirement assets and other legacy giving options.