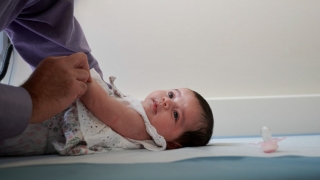 Instead of facing a devastating slide to inevitable death by age 2, the hope is that Millie will be playing with her brother, toddling around her family’s home in Northeast Philadelphia and doing the things other little girls do.

Millie has spinal muscular atrophy (SMA). In SMA, motor neurons, the cells that signal muscles to move, are missing an essential protein and die. Without the signal, muscles waste away.

In the past, children like Millie with type 1 SMA — the most severe kind — never sat independently and eventually lost the ability to breathe or swallow on their own, leading to their heartbreakingly short lives. Those with the less severe type 2 SMA regressed as toddlers, losing skills when they should be gaining them. They would never walk; would need help eating, dressing and with other routine tasks of living; and would need mechanical assistance to breathe. While it’s a rare disease — about one in every 10,000 babies is born with SMA — it is the leading genetic cause of death in infants.

“We call her our miracle baby,” says Lizmara, Millie’s mother. “To learn that the gene therapy would basically replace the gene mutation and freeze the SMA, we were super excited.”

Another family facing an SMA diagnosis, the Watkins-Domalski family, was so enthusiastic about the treatment their daughter, Céline, received, they made a generous donation to fuel additional research at CHOP. 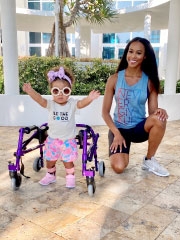 Céline, pictured with her mother, Amber-Joi Watkins, is building muscle strength every day, thanks to treatment and ongoing therapy at CHOP. Her parents are funding additional SMA research. The excitement both families experienced was made possible by two new treatments that put the brakes on the destructive disease, allowing children to progress toward normal development. With one of the largest neurology programs in the country, Children's Hospital of Philadelphia (CHOP) was a pivotal clinical trial site as the treatments were tested prior to their eventual Food and Drug Administration (FDA) approvals. Both work with the genes that affect motor neurons.

In SMA, when the SMN1 gene is faulty, it doesn’t make a protein that motor neurons need to function and send signals to muscles. Another gene, SMN2, is a “back-up” gene and also produces a small amount of the protein. The severity of a child’s SMA is linked to how much of the protein they have.

First came a therapy, Spinraza®, given as an injection in the spinal cord, that boosts the efforts of the SMA2 gene so it makes more protein. It was approved by the FDA in December 2016 for patients of all ages. After four initial doses, patients must receive a dose every four months for life.

Then Zolgensma®, a one-time gene therapy for SMA, was approved by the FDA in May 2019, limited for use in patients under the age of 2. Manufactured copies of SMN are delivered by intravenous infusion. These modified genes continue to live in the cell nucleus and make the protein, so motor neurons keep firing.

While neither treatment is a cure, they stop or at least slow SMA’s unrelenting march of degenerative nerve damage. Muscle function is restored.

The sooner, the better

Research so far shows that the earlier children receive treatment, the better their outcomes. Once a motor neuron dies, it’s gone forever. “The speed to treatment is big,” says neurologist Elizabeth Kichula, MD, PhD. “Every week, every month ... they lose motor neurons they’re not able to get back.”

Millie was born in July, only four months after Pennsylvania had added SMA to the uniform newborn screening, so she was automatically tested. Her parents learned her diagnosis when she was 4 days old. She received Zolgensma at 19 days old, making her the youngest patient to be treated at CHOP.

Unfortunately, babies born before screening was automatic may not be diagnosed until they begin having problems.

From normal to weak

That was the case for Céline Domalski, who was developing normally for her first few months. Then her mother, Amber-Joi Watkins, began noticing something was different about Céline when she was about 4 months old. In mommy-and-me yoga, Céline didn’t move like the other babies. Their pediatrician told her that babies develop in their own time and not to worry.

But in the weeks that followed, Céline’s body became weaker. At times she couldn’t hold her head up, sit up unassisted or roll over.

At Céline’s 6-month checkup, the pediatrician noted the decline and suspected SMA. At CHOP, Kichula confirmed the diagnosis: type 1 SMA. Céline was quickly started on the Spinraza injections, and Kichula applied to the FDA to get special approval for her to use the gene therapy, which wasn’t FDA-approved at that time.

The FDA granted the request, and Céline received a Zolgensma infusion. She continues to receive Spinraza, and so far, the combination of both treatments has helped rebuild muscle strength. With the help of physical therapy at CHOP, she’s gaining muscle control and can sit up without assistance and stand with leg braces.

“She’s doing great,” Amber-Joi says. “We still have a long way to go, but we have ambitious goals for her, which include walking. That has not been typical for kids with SMA, but because of the treatments and therapies, we believe she will do it.”

Millie later also began receiving the injections when she showed some core muscle weakness in her first few visits after the gene therapy. Brandsema believed she probably had some motor neuron loss before birth and the second therapy would give her a boost. And it has: She continues to improve and shows none of the worrying signs of breathing or swallowing difficulty. “It’s an important reminder that while these treatments are game-changers, SMA is still a serious disease we are fighting,” Brandsema says.

Millie and Céline demonstrate why ongoing research is vital to meeting the challenges children still face. Research so far has shown both treatments continue to be effective, but it’s just too soon to know if improvements will last. Hopes are high, “but we don’t yet understand the long-term durability,” Brandsema says. He and Kichula are part of the international network of researchers studying the progress of patients like Céline and Millie and tracking the natural history of SMA.

CHOP is part of a trial of Zolgensma for children up to 5 years old to see if it can help those who don’t show symptoms until they are older, and plans to conduct future clinical trials for even older patients with SMA. CHOP researchers are also working to uncover additional biomarkers for SMA, which could provide guidance on optimal timing to begin treatment and, eventually, point to new ways to treat the disease.

Between Céline’s PT, aquatic therapy, the ongoing injections, Pulmonology appointments and Neurology checkups, the family visits CHOP frequently. “We’re there all the time,” Amber-Joi says. “We see all the wonderful things happening.”

The combination of those observations and their family’s personal experience spurred Amber-Joi and her husband, Tommy Domalski, to establish through a $100,000 gift the first-ever fund at CHOP to support ongoing SMA research.

“There are other treatments in the pipeline, and we want to help further research that will make a better future for kids like Céline,” says Amber-Joi. “Our passion is SMA research.”