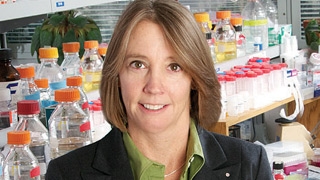 “Heart disease is the second leading cause of death in Huntington’s disease patients, but its biology remains poorly understood,” said study leader Beverly L. Davidson, PhD, Director of the Raymond G. Perelman Center for Cellular and Molecular Therapeutics at Children’s Hospital of Philadelphia (CHOP), where she is an expert on gene therapy for inherited brain disorders. “Better knowledge of the underlying biology of Huntington’s disease will improve the development of effective therapies.”

Because mHTT disrupts multiple fundamental processes in cells throughout the body, it impairs multiple organ systems. The current study focused on heart function in mouse models of HD. The mutant protein mHTT disrupts functioning along the mTORC1 pathway, named for the signaling protein complex mTORC1 that promotes cellular growth and metabolism.

Researchers already knew that mTORC1 function plays a key role in the neurology of HD. The current study showed that mTORC1 activity was lower in HD mice than in healthy mice. The HD mice also had smaller-than-normal hearts. Crucially, the study team found that HD mice were less able to adapt to stress on their hearts, and had higher mortality from that stress.

When the researchers restored mTORC1 activation in the HD mice by using genetic techniques to knock down the mutant HTT protein, the mice were better able to adapt to cardiac stress and had higher survival over the course of the study.

“If the mHTT protein has a similar effect on human hearts as in the mice, it may explain the heart-related mortality seen in HT patients,” said Davidson, adding that future studies in HT should investigate that question. Given that there are currently clinical trials of HTT-lowering therapy in Huntington’s disease patients, it is important to better understand how HD affects organs outside the central nervous system.

In addition, some researchers propose using mTORC1 inhibitors to treat HD, but the new study suggests that this approach could cause unintended effects on cardiac function. “We know from our previous studies that improving mTORC1 functioning may have a protective effect in HD, but this would require carefully adjusting the pathway to restore normal mTORC1 levels,” said Davidson.

The National Institutes of Health supported this study (grants NS084475, NS076631, HL007954, and HL007638). In addition to her CHOP position, Davidson is on the faculty of the Perelman School of Medicine at the University of Pennsylvania.