Experts in pediatric heart disease from across the country shared the latest findings from their research at a large national conference hosted by the Cardiac Center at CHOP. 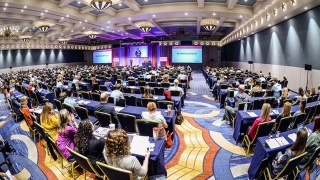 Experts in pediatric heart disease from across the country shared the latest findings from their research at a large national conference hosted by the Cardiac Center at Children’s Hospital of Philadelphia (CHOP). The 23rd Annual Update on Pediatric and Congenital Cardiovascular Disease, “Vision 20/20: Lessons from the Past, a Bold Look Toward the Future,” took place from February 12 to February 16 in Lake Buena Vista, Florida. Experts presented research focusing on improving the quality and duration of life for those with pediatric and congenital cardiovascular disease.

Researchers demonstrated that skin-to-skin care (SSC) is a low-cost, low-risk, nurse-led intervention that reduces maternal stress and anxiety, promotes infant comfort, and supports stable vital signs before and after neonatal cardiac surgery. Following 30 mother-infant pairs, the team of researchers placed the infants in SSC with their biological mothers at two time points for one hour each: once before surgery and once after surgery. They measured mothers’ stress and anxiety and infant pain and vital signs immediately before SSC, 30 minutes into SSC, and 30 minutes after SSC had ended. They found that both before and after surgery, mothers’ anxiety scores were significantly lowered during and after SSC, and their cortisol levels – indicators of physiological stress – also decreased. Infant pain scores dropped during SSC before and after surgery, and infants were sleepier when compared to baseline. Infant heart and respiratory rates decreased during SSC before surgery, and systolic blood pressure increased. Both before and after surgery, infant cortisol remained stable before and during SSC, but cortisol increased after SSC. Researchers noted that infants with higher baseline cortisol after surgery saw significantly lower cortisol during SSC. Researchers say more research is needed to identify factors that lead to higher infant baseline cortisol and how SSC could be used to reduce stress in infants with congenital heart disease (CHD).

CHOP researchers examined how often children in different risk categories had their cholesterol and triglycerides checked. Doctors recommend screening for atherosclerosis – the narrowing of arteries due to plaque buildup – twice during childhood through a universal lipid panel because the condition typically begins in childhood. For patients with congenital and acquired heart conditions, including cardiomyopathy and coronary artery anomalies, the recommendation is to screen early because those patients are at higher risk for developing atherosclerotic heart disease. Researchers reviewed commercial and Medicaid insurance claims databases to assess the rates of lipid screening in children with high-risk cardiac diagnoses, as well as those with congenital heart disease and the general population. Analyzing more than 5 million records, they found that lipid screening in children with high-risk conditions predisposing them to early atherosclerosis was about the same as screening in low-risk cardiac patients (28% vs. 26%, respectively) and only slightly higher than the 19% screening rate for the general population. Patients who had undergone a heart transplant were screened at a higher rate (70%), as were those with cardiomyopathy (41%). However, only 28% of patients with complex two-ventricle or single-ventricle disease were screened. The research team suggests factors like testing access, practice variation and family choice could explain why many high-risk patients aren’t being screened, but that more research is needed to understand the phenomenon and increase screening rates.

Changes in Ventricular Function Over Time after Fontan

CHOP researchers studied changes in ventricular function over time in patients with single-ventricle disease who had undergone Fontan, a surgical procedure that redirects blood flow from the lower body to the lungs. Although numerous indicators have been developed to measure ventricular function in patients with single-ventricle disease, little data exists on how the parameters change over time. Examining 141 echocardiograms from 18 unique patients between 2006 and 2017, the team found that although measures of ventricular function after Fontan operations were consistently different from what one would expect in a population without congenital heart disease, there was no significant change to these measures over a decade of follow-up. The team suggests that the failure of the Fontan circulation is likely multifactorial and may occur without decline in systolic ventricular function.

Links Found Between Post-Operative Outcomes in Tetralogy of Fallot and Serum Biomarkers, Length of Hospital Stay

Infants with Tetralogy of Fallot (TOF), a combination of four congenital heart conditions that often causes oxygen-poor blood to flow out of the heart and into the rest of the body, have worsening right ventricular strain after surgery, which improves over the next one to two years. Given that blood serum biomarkers of myocyte stretch and fibrosis might also be associated with postoperative outcomes, CHOP researchers followed a group of 64 TOF patients between 2014 and 2018 to see if such an association existed. Serum biomarkers were drawn before surgery, and research echocardiograms were performed two and five days after surgery. Patients were divided into two groups: those whose hospital stay was more than seven days, and those whose stay was less than seven days. Patients in the study also had echocardiograms and biomarker measurements one and two years after surgery. Researchers found a longer hospital stay after TOF repair is associated with worse right ventricular strain and higher levels serum biomarker MMP1 one year after surgery, suggesting the length of time a patient spends in the hospital after surgery may correspond with poorer outcomes in the initial months following TOP repair.

Researchers studied 76 infants diagnosed at the CHOP Fetal Heart Program and born in CHOP’s Garbose Family Special Delivery Unit (SDU) between 2012 and 2017 who had transposition of the great arteries (D-TGA), the most common congenital heart defect to present in the first week of life that results in low blood oxygen levels. Looking at the infants’ complete medical records, the researchers investigated the association between the infants’ blood oxygen levels in the delivery room and whether or not they later underwent balloon atrial septostomy (BAS), a catheterization procedure in which a small hole is created between the upper two chambers of the heart to increase the flow of oxygen-rich blood. They found that about two-thirds of infants with D-TGA followed in the study were intubated and exposed to 100% oxygen in the delivery room, both interventions that were significantly associated with the infants subsequently undergoing BAS. All patients who were unable to attain a blood oxygen saturation of 74% or higher in the delivery room ultimately underwent BAS, while those who achieved blood oxygen saturation of 85% or higher had a lower likelihood of BAS. The research team concluded that the blood oxygen saturation levels observed as early as the delivery room may help determine whether or not BAS will be needed.

Researchers in CHOP’s Fetal Heart Program studied infants with absence of the ductus venosus (ADV), a congenital anomaly of the fetal circulatory system with two subtypes: extrahepatic, in which the umbilical venous drainage bypasses the liver, and intrahepatic, in which the flow enters the liver. Based on limited published and anecdotal data, extrahepatic ADV patients are thoughts to have an increased risk of developing volume overload while in the womb, and intrahepatic ADV patients may have more genetic syndromes and other non-cardiac congenital anomalies. To better understand the clinical characteristics and outcomes of these patients, researchers reviewed maternal prenatal medical records and fetal echocardiogram images of nearly 200 mothers who were part of CHOP’s Fetal Heart Program between 2008 and 2019. Pediatric medical records were also examined when available. They found that patients with extrahepatic ADV had higher incidence of prenatal volume overload, as well as issues like enlarged heart, umbilical venous pulsations and tricuspid regurgitation. These patients also tended to have longer hospital stays during their initial hospitalizations. ADV patients who had concurrent congenital heart disease had a higher rate of postnatal death, a finding that the research team says warrants further study. The research may lead to better prenatal counseling, targeted postnatal management, and improved outcomes.

Pediatric cardiac patients admitted to CHOP’s Cardiac Preparation and Recovery Unit (CPRU) require peripheral intravascular catheters (PIVs) prior to their procedure. However, historically only nurses in CHOP’s Vascular Access Service (VAS) were the ones responsible for PIVs for all patients. The procedure monopolized VAS resources every morning and led to scheduling delays in services offered by the unit. To streamline the process and avoid delays in procedures, CPRU nurses developed a program to train their staff in PIV insertion in order to offload that responsibility from VAS nurses. In a two-phase project between 2017 and 2019, CPRU nurses received initial training by the VAS team and then underwent an immersion experience with the VAS team to practice PIV placement for a minimum of two hours. The two teams also developed a partnership so that in difficult cases, the VAS team could support the CPRU nurses. In addition, the team trained three unit-based “Qualified Observers” to help train and mentor other Cardiac Center nurses in PIV placement. Using this two-phase process, the CPRU nursing team was able to increase rates of successful PIV placement by CPRU nurses from 83% success after phase one to 89% after phase two and decrease the number of delayed procedures from 4.6% after phase one to 1.8% after phase two. Overall PIV management and care also improved over the course of the project.