BS was a 6-week-old male who was in the operating room at Children’s Hospital of Philadelphia for a routine hernia repair. The anesthesiologist was attempting to secure an airway for surgery via endotracheal tube (ETT) intubation. That is when trouble started; the anesthesiologist could not pass the ETT into his airway. He immediately knew something was not right so he paged an Airway MD to the operating room. The OR quickly mobilized to perform a microlaryngoscopy and bronchoscopy (MLB) to assess the airway. 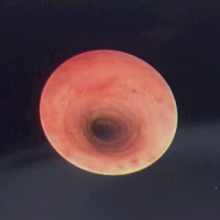 Figure 1 The MLB determined that the patient had complete tracheal rings starting right from the inferior most aspect of the larynx and going all the way down to the distal most aspect of the trachea (Figure 1). In fact, the surgeon could not safely pass the smallest 2.2 mm endoscope to visualize the carina because the airway was so narrow at its distal most extent. The smallest ETT (2.5) was gently passed into BS’s airway in order to proceed with the hernia operation. The infant was taken to the NICU postoperatively for airway observation following extubation. The concern was any potential airway swelling from the airway manipulation could tip the child toward respiratory distress or compromise after extubation.

Further details fill in the puzzle

After surgery, the findings of BS’s airway were reviewed with his parents. Upon discussing his history, further interesting details came to light. He had required supplemental airway assistance after birth and a short NICU stay for respiratory support. Since being home, he had struggled with weight gain and had intermittent inspiratory stridor at times associated with retractions on his chest. Mother also reported “heavy breathing” at times. Combining the operating room findings and the patient’s history, it was recommended to perform studies to further delineate his unique anatomy.  A CT angiography of the chest was ordered with 3D reconstruction. This test revealed the entire trachea to have stenosis from the larynx all the way down to the carina with complete tracheal rings. The tracheal airway was 2 mm at its narrowest. 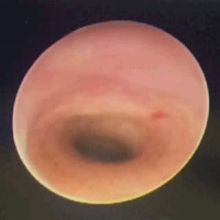 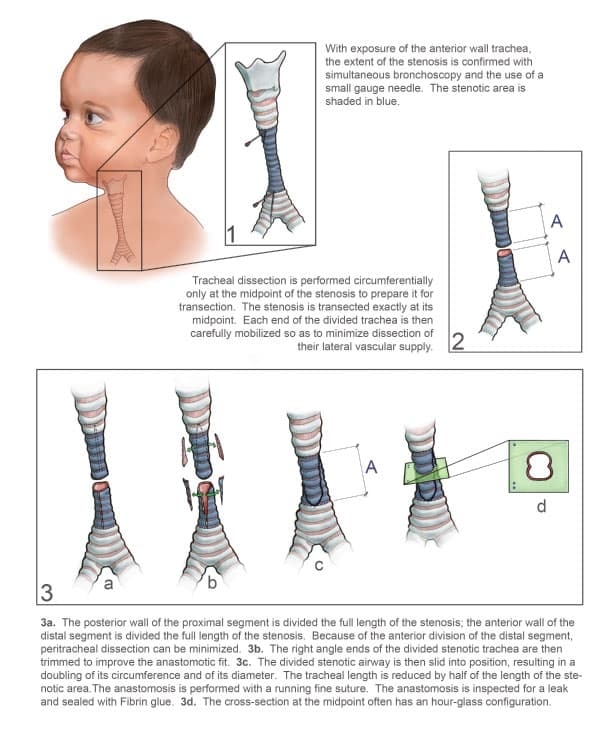 Figure 3: Composite credit: Medical illustration by Brian Dunham, MD, Stream Studios at CHOP BS continued to stay in the NICU for airway observation while recovering from hernia surgery and in preparation for the joint ENT-CT procedure. Subsequently, he went to the operating room for a median sternotomy, cardiopulmonary bypass, and slide tracheoplasty. During surgery, ENT and CT surgery worked together to confirm that, indeed, the stenosis ran the full length of the trachea from the cricoid cartilage of the larynx to the carina. After the patient was safely put on cardiopulmonary bypass by CT surgery, the trachea was 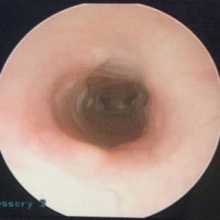 Figure 4 transected completely at the midpoint of the stenotic segment, creating a proximal and distal tracheal limb. Next, the complete rings were released. This is done by longitudinally incising the trachea, and thus releasing the rings along the posterior aspect of the distal tracheal limb, and longitudinally along the anterior tracheal wall on the proximal segment. Along the longitudinal incisions of both limbs, the tracheal segments are distracted open and then sutured together after the limbs are slid one over the other. (See Figure 3.) Although this shortens the overall length of the airway, the caliber of the airway is increased. CT surgery also repaired the left pulmonary artery sling to relieve the pressure this exerted on the trachea. 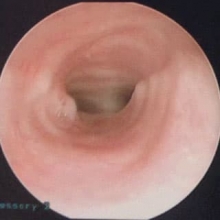 Figure 5 BS recovered first in the CICU and then in the NICU. He was successfully extubated on post-operative day 2. MLB exams in the operating room were performed periodically to monitor his healing, and soon he was breathing normally without supplemental oxygen or other respiratory interventions (Figures 4 and 5). Speech and swallow therapists from the Center for Pediatric Airway Disorders evaluated him during his inpatient recovery to ensure the initiation of safe oral feeding. 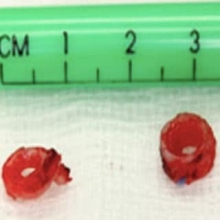 Figure 6 Complete tracheal rings are a very rare birth defect where the cartilage form complete “O” rings instead of the usual “C” shaped rings (Figure 6). These complete rings narrow the airway and often involve more than 50% of the tracheal airway and can even involve the entire trachea as in the case of BS. Although this disorder is very rare, it can often result in as high as 80% mortality if not brought to the attention of specialized care. Children with this disorder often have associated conditions with cardiovascular anomalies (such as a ventricular septal defect, tetralogy of Fallot, and a left pulmonary artery sling), lung anomalies, or genetic syndromes such as trisomy 21.

BS presented with many of the symptoms that babies or children with long segment tracheal stenosis exhibit. He had wet, inspiratory stridor (a high-pitched type of noisy breathing); poor weight gain; retractions during breathing; chest congestion; and difficult intubation history. Other children have presented with frequent pneumonias, cyanotic episodes (blue spells), or inability to wean from an ETT and mechanical ventilation. Chest congestion, frequent pneumonias, and upper respiratory infections result from ineffective airway clearance due to the stenosis.

Some infants and children can have such mild symptoms that it may not be discovered until they have an elective surgery that requires intubation. In other cases, the child is in such distress when they are born that they require immediate evaluation in the operating room. Questions to ask in the history are: 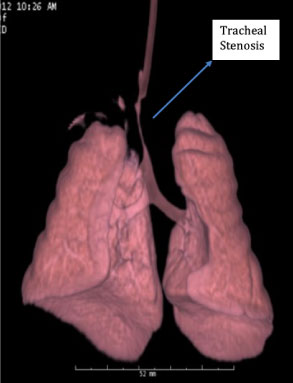 The diagnostic work up is both MLB and a CT angiogram. The MLB provides a visual of the airway disorder while the CT angiogram with 3D reconstruction demonstrates the extent and if there are any concurrent cardiac anomalies (Figure 7). Genetics may be involved due to the high association of complete tracheal rings and long segmented tracheal stenosis with some syndromes.

The Center for Pediatric Airway Disorders believes in a team approach to tackle this complex problem. The team consists of an airway surgeon from pediatric otolaryngology, a cardiothoracic surgeon, intensive care physicians, specialized airway nurse practitioners, speech and swallow therapists, pulmonologists, and gastroenterologists. By working together, it is possible for children with long segment tracheal stenosis to live a healthy, normal life.

Slide tracheoplasty is the gold standard treatment for children with long segment tracheal stenosis. Previous surgical methods to manage these children were inadequate. Patch tracheoplasty involved using a pericardial patch to augment the airway, but still resulted in high rates of life threatening tracheomalacia. Tracheal resection was often inadequate or not possible due to the length of the stenosis that needs to be removed and the resulting tracheal ends that may not be able to reapproximate easily. And finally, rib cartilage tracheoplasty involved using rib cartilage to augment the narrowed airway but unfortunately relied on harvesting a sizeable graft from the rib cage. This is not usually possible often in young children/infants.

Slide tracheoplasty is far superior to these antiquated surgical management options, with greatly decreased mortality rates, shorter hospitalizations, and quicker recovery. Advantages include the ability to reconstruct with normal, vascularized, tracheal tissue; less tension on the anastomosis site; less granulation tissue development in the trachea at the surgical site; and continued tracheal growth over time.

Postoperative care focuses on pain management, sternotomy precautions, dressing management to the sternum, PO feeding, keeping the head midline and flexed, physical therapy and occupational therapy to have the child out of bed, and transitioning to normal daily life activities. A repeat MLB is performed about a week after extubation to insure airway patency and again several times thereafter to monitor healing. Sometimes patients may need dilation or excision of granulation tissue during the healing phase. The family is educated on what to advocate for if the child needs future intubations as the trachea is now shorter.

This course is intended for junior ENT residents looking to upgrade their endoscopy skills.

The Center for Pediatric Airway Disorders at CHOP offers advanced care and surgery for children with complex airway and swallowing problems.