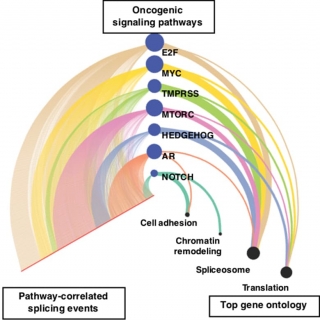 Hive plot depicting the impact of oncogenic signaling on alternative splicing in prostate cancers. A multi-institutional group of researchers led by Children’s Hospital of Philadelphia (CHOP) has linked a strong cancer driver gene to changes in proteins that regulate alternative splicing. The researchers created new computational tools and biological model systems for the study. This collaborative research, led by Yi Xing, PhD, at CHOP and Owen Witte, MD, at the University of California, Los Angeles (UCLA), was published today in the Proceedings of the National Academy of Sciences.

“Our study provides insight into the relationship between an important cancer driver gene and alternative splicing changes that could be used to guide the development of splicing-targeted cancer therapy,” said Xing, PhD, director of the Center for Computational and Genomic Medicine at CHOP and senior author of the study.

The collaborative effort involved researchers at CHOP, UCLA, and the Roswell Park Comprehensive Cancer Center. John Phillips, MD, PhD, a researcher at UCLA, and Yang Pan, MS, a visiting scholar at CHOP and graduate student at UCLA, were first authors of the study.

Alternative splicing is an essential process that allows for one gene to code for many gene products, based on where the RNA is cut, or spliced, before being translated into proteins. Cancer cells often take advantage of this process to produce proteins that promote growth and survival, allowing them to replicate uncontrollably and metastasize. This happens in many cancers, including prostate cancer, which is associated with shifts in splicing patterns. Yet scientists do not fully understand the process that leads to this change.

To better understand the causes and consequences of alternative splicing changes during cancer progression, the team looked at RNA sequences from nearly 900 prostate tissue samples, ranging from healthy prostate tissue to localized or aggressive metastatic tumor tissue. In order to efficiently analyze such large datasets, the team created a new computational program called rMATS-turbo. Using this program, the researchers identified more than 13,000 alternative splicing events that varied across these 900 prostate samples.

Researchers then applied the same PEGASAS strategy to breast cancer and lung cancer datasets and found the same association between Myc activity and alternative splicing, suggesting Myc activation – and thus disruptions in splicing – occurs in many cancers.

“The successful application of PEGASAS to prostate, breast, and lung cancer datasets suggests that this strategy could be useful in analyzing pathway-driven alternative splicing in many cancer types,” said Xing. “Given the involvement of oncogenic pathways such as the Myc pathway in pediatric cancers, these tools could reveal pathways and targets for treating pediatric cancers as well.”

The study was supported in part by the Immuno-Oncology Translational Network (IOTN) of the National Cancer Institute’s Cancer Moonshot Initiative (grants U01CA233074, U24CA232979), other National Cancer Institute funding (grants R01CA220238, and P50CA092131), along with funding from the Parker Institute for Cancer Immunotherapy (grant 20163828), the UCLA Tumor Cell Biology Training Grant (T32CA009056), and the Prostate Cancer Research Program under the Office of the Assistant Secretary of Defense for Health Affairs (grant W81XWH-16-1-0216).