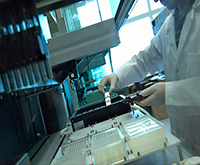 Researcher in the Genomics Lab February 20, 2014 — A large international study analyzing genes in tens of thousands of individuals has discovered 11 new genetic signals associated with blood pressure levels. Ten of those signals are in or very near genes encoding proteins that appear to be likely targets for drugs already in existence or in development.

“The fact that most of these new gene signals are ‘druggable’ targets offers the possibility of expedited pharmaceutical development of therapeutics for high blood pressure, a serious risk factor for cardiovascular diseases,” said geneticist Brendan J. Keating, DPhil, of the Center for Applied Genomics at The Children’s Hospital of Philadelphia, co-senior author of the study. “Some of the protein targets already are targets of existing drugs for other diseases, while others are the focus of drugs currently in early-phase clinical trials or under preclinical development.”

High blood pressure, or hypertension, a chronic medical condition, is a well-known risk factor for heart disease, stroke, peripheral artery disease and chronic kidney disease. It is a complex condition, affected by many different genes. Because not all patients respond well to current blood pressure medications and other treatments, and other patients require combinations of three or more drugs, there is a substantial unmet need for improved medicines.

In the current study, the researchers performed a discovery analysis of DNA from more than 87,000 individuals of European ancestry. They then assessed their initial findings in a replication test, using an independent set of another 68,000 individuals.

The study team confirmed 27 previously discovered gene signals associated with blood pressure, and discovered 11 novel genetic signals. When the researchers used pharmacological databases to analyze potential targets in the discovered genetic regions, they found that gene products associated with 10 of the genes were predicted to be targets for small-molecule drugs.

“If clinicians can reposition existing drugs to treat some patients with hypertension, this will save significant time in drug development, as they won’t be starting development from scratch,” said Keating.

Keating added that other gene signals discovered in the study are associated with candidate drugs currently under development within pharmaceutical companies, and it may be possible that they can be repositioned as blood pressure therapeutics.

He stressed that even with possible repositioning, much research remains to be done to determine which drug candidates are effective against hypertension, possibly in personalized treatments based on patients’ genetic makeup. Keating added that the list of genes affecting blood pressure will likely grow as research continues.

Keating received funding in part from the National Heart, Lung and Blood Institute. Other study funders included the British Heart Foundation and the Netherlands Organisation for Health Research and Development. In addition to his position at CHOP, Keating also is a faculty member of the Department of Pediatrics and the Division of Transplantation in the Department of Surgery in the Perelman School of Medicine at the University of Pennsylvania.