Our new hospital is open! 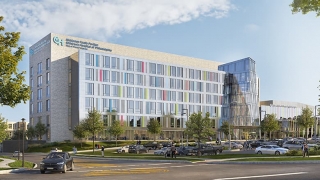 The Middleman Family Pavilion at Children’s Hospital of Philadelphia, King of Prussia, CHOP’s second hospital, opened at the end of January 2021. We are thrilled to offer area families the family-centered care CHOP is known for closer to their homes.

All inpatient rooms are singles and have an outside window and a dedicated area for caregivers so when their child is sleeping, they can watch their own TV, catch up on work or reading, or sleep themselves.

CHOP honored as among world’s best by Newsweek

CHOP was recently selected as the third best specialized hospital for pediatrics on Newsweek’s list of the World’s Best Specialized Hospitals for 2022. The distinction was compiled by Newsweek and Statista Inc., a world-leading provider of consumer and business data.

The list identifies the top 10 hospitals over a wide variety of specialties. CHOP was ranked the No. 3 provider for Pediatric and Adolescent Medicine in the world. More than 40,000 medical experts across more than 20 counties, including doctors and other healthcare professionals, participated in online surveys assessing hospitals based on their specializations. This was the first year that pediatric hospitals were part of the ranking.

No harm to newborns who had pandemic-related shortened hospital stays

Healthy full-term infants born during the COVID-19 pandemic had substantially shorter hospital stays than those born before the pandemic, with no change in hospital readmissions after discharge, according to a new study led by researchers at CHOP.

“These findings suggest that shorter hospital stays after birth among healthy term infants may be safe with respect to infant rehospitalization, though examination of additional outcomes is needed,” says Sara Handley, MD, MSCE, CHOP neonatologist and first author of the study, which was published in Pediatrics.

Researchers studied EMR data from 35 health systems and 202 385 infants, comparing pre-pandemic and COVID-19-era experiences. Despite shorter hospital stays, infant rehospitalizations within a week of discharge from the hospital decreased slightly during the pandemic (1.2% to 1.1%).

“Further work is needed to determine how to quantify tumor risk in patients in the broader Beckwith-Wiedemann spectrum,” says senior author Jennifer Kalish, MD, PhD, Director of the Beckwith-Wiedemann Syndrome Program of Excellence, “and we need to revise the current clinical characterization.”

A study from CHOP’s Center for Injury Research and Prevention and the University of Pennsylvania shows that despite mandatory reporting, only 54% of adult neurosurgery and neurology providers said they had ever filed a medical report with the Pennsylvania Department of Transportation regarding a patient’s fitness to drive. Only 20% of inpatient providers and 50% of outpatient providers said they usually or always discussed driving with patients. Only about half reported receiving any form of training on the topic, and it was informal (i.e., independent reading or advice from a mentor or colleague). Seizures were the most common reason to discuss safe driving or to report a patient to PennDOT despite multiple conditions that could affect driving.

The full study was published in Traffic Injury Prevention.

Children’s Hospital of Philadelphia and the University of Pennsylvania School of Medicine were jointly named a Rare Disease Center of Excellence by the National Organization for Rare Diseases (NORD).

CHOP and Penn Medicine represent 1 of 31 NORD Rare Disease Centers of Excellence across the United States. Each Center of Excellence was selected by NORD in a competitive application process.

CHOP was part of a 5-hospital study, published in JAMA Pediatrics, that showed clinical whole-genome sequencing (cWGS) outperforms usual care in terms of diagnostic efficacy and change of clinical management of acutely ill newborns suspected of having a genetic condition.

The patient population of 354 infants was randomized to either receive cWGS within 15 days (early arm) or 60 days (delayed arm) of admission, with a total observation period of 90 days. In both arms of the study, access to cWGS doubled the proportion of patients receiving a precision diagnosis of their condition and a change of clinical management.

“The clear link between establishing a diagnosis and improved care management lends much weight to the adoption of cWGS as a first-tier diagnostic test in critically-ill newborns,” says coauthor Ian Krantz, MD, Director of CHOP’s Roberts Individualized Medical Genetics Center.