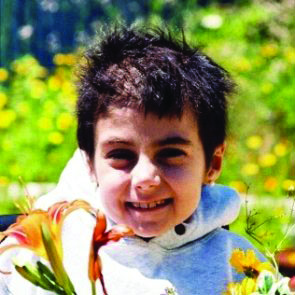 Alex Scott set up her first lemonade stand to raise money to help her doctors at CHOP. Her memory continues to inspire their work. Did you know that the incredible little girl who founded Alex’s Lemonade Stand was a patient at Children’s Hospital of Philadelphia (CHOP)?

Alex Scott was diagnosed with a rare cancer called neuroblastoma at CHOP just before she turned 1. A team of CHOP doctors and nurses fought alongside Alex and her family as they went through the physical and emotional turmoil of pediatric cancer.

When Alex was 4, she and her brother set up a lemonade stand in their front yard to raise money to help her doctors find cures for cancer — and raised $2,000 in one day!

Alex died when she was 8, having accomplished and set in motion amazing things. In her lifetime she raised more than $1 million. Since then, her family’s Alex’s Lemonade Stand Foundation has raised $150 million to fund pediatric cancer research and help families navigate the terrain after a childhood cancer diagnosis.

Like sugar and lemons, Alex’s Lemonade Stand Foundation and Children’s Hospital of Philadelphia make each other better. Every year, CHOP sets up lemonade stands throughout its Main Campus and Care Network locations to raise money in honor of a little girl who changed the world.

And CHOP scientists, physicians and nurses have received millions of dollars in grants from Alex’s Lemonade Stand Foundation over the past 15 years, honoring a treasured patient in the most meaningful way — by striving for cures.

Funding Research to Honor a Life

This fall, CHOP and Alex’s parents, Jay and Liz Scott, celebrated the establishment of the Patricia Brophy Endowed Chair in Pediatric Neuroblastoma Research. Pediatric oncologist and researcher Yael Mossé, MD, Director of the Neuroblastoma Development Therapeutics Program at CHOP, has been named the inaugural holder. The endowed chair will fund research into new treatments for the cancer that took Alex’s life.

Patricia “Pat” Brophy was one of Alex’s nurses at CHOP. Beloved by many patients and families, she passed away in 2008 after her own battle with cancer. The funds for the endowed chair came from donations made to CHOP in Alex’s memory.

“Pat Brophy had a big impact on our family's life, and on the lives of so many other childhood cancer families,” says Jay Scott. “We are lucky to be able to honor her life and accomplishments through this endowment.”