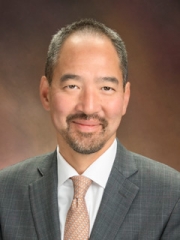 Dr. Chen recently sat down for an informal Q&A session to talk about why he loves working with children, what career he'd choose if he wasn't in medicine, his vision for the Cardiac Center, and much more.

Q: What do you like most about working with children?

A: Their resilience and their honesty. It's remarkable to see how quickly a newborn or an infant will recover from a cardiac operation; it's exponentially faster than an adult or an older person. Frankly, it's remarkable.

I also love when kids can be more interactive with their care. The toddlers and the tweeners have some really good questions, and sometimes they are more direct than their parents. Part of the fun is getting to connect with the kids and see how much better they're doing after treatment. It's amazing to see them go back to living a full lifestyle so much better than they were before the operation.

Q: What's your advice to families coming to CHOP?

A: Ask questions. There's no question too silly or too mundane. Don't think there's any question we've never heard before or that hasn't been asked by somebody else. Don't feel inhibited. Ask surgeons how many of these operations CHOP performs. What do long-term outcomes for the operations look like? Are there alternative procedures or devices on the horizon that may change the decision? Do your research and ask the questions because, in the end, the most important thing is that you feel comfortable and confident with your child going into the operating room with the expert team at CHOP. Don't hold back because you think you're going to offend someone or because the question seems basic.

Q: Can you describe a personal or professional breakthrough in your life?

A: I think the breakthrough moment for me personally — and professionally — was when I decided to go into congenital heart surgery. I had trained in New York at Columbia and was planning to be an adult heart failure/transplant/cardiac surgery/LVAD [left ventricular assist device] surgeon — at the time in the 1990s it was the profile of the Columbia graduates.

About two-thirds of the way through my training, I really got enticed by the idea of doing congenital heart surgery, but was a little bit intimidated by the field and the extra training. Then I had this moment where I thought, I don't think I can go through the rest of my life just bypassing coronaries and replacing valves.

I really needed that intellectual curiosity part — the chance to solve some of the biggest unsolved questions. The other reason, obviously, is that by operating on a 90-year-old, you give them seven years of life saved; you operate on a baby, and you give them 97 years of life saved. That was very profound to me to consider: They are such different fields and yet still considered cardiac surgery. That was a big moment for me to say, I'm going to completely change my focus to concentrate on children.

Q: Who was your hero or role model?

A: I've had so many heroes and role models along the way, but probably one who had the biggest impact on me is a surgeon named Eric Rose. He was the Chair of Surgery at Columbia for many years and was a cardiac surgeon himself. Eric was influential in so many different ways that everybody who trained at Columbia thereafter for about 20 years would consider themselves, as I do, to be the next generation of Rose. The two things that he would always say was: "Why? Challenge me. Tell me why this should be the case." And the other was: "Teach me." If you were going to do a case with him and you wanted to try something else, he was open to the idea, but you had to tell him why you wanted to do it a different way, and if it was a good enough reason, he'd try it.

That was the beauty of Columbia in the '90s as a cardiac surgeon. The Department of Surgery was a hotbed of innovation because Keith Reemtsma [former Chairman of the Department of Surgery at Columbia] and Eric Rose’s philosophy was that we should be the place to test new devices and new approaches, and shame on us if we don't have the courage to do that. Eric was a great, great mentor for that reason.

Q: Is there a specific condition or treatment that interests you from a research or clinical perspective?

Sometimes, that same valve will grow and be normal all the way up into adulthood. And the question is: How is that possible? Because we are taking out the valve — devoid of all blood vessel connections — and putting it in a completely different place. Yet, it grows and it repairs itself. That to me is amazing. It is now being speculated that we may be inadvertently transferring some of the basic stem cells that are responsible for repair and growth. And wouldn’t that be amazing if that were true? And to think of the implication that identifying such cells could have!

A: The Sneetches, by Dr. Seuss. It's a terrific story that's about prejudice based on superficial appearances, and how, in fact, it’s what’s inside that matters. Very timely actually. The meter is perfect and the illustrations are perfect. And because children's books can be really, really boring to read over and over again, I started a long time ago to read them to my kids in a fake British accent to make it more interesting to me — and The Sneetches just so happens to be perfectly written for a fake British accent (and a lot of dramatics).

Q: Who's your favorite superhero?

A: I guess I'd have to say Spiderman because he's clever, he's a scientist, and he fights crime. He's not in it for the fame the way Superman seems to be.

Q: If you could have a superpower, what would it be?

Q: If you weren't a surgeon, what do you think you'd be doing?

A: I had aspirations of being an architect, but I think I probably would have been a better writer. Architecture always sort of appealed to me. I think part of it is that I have really messy handwriting, and I love the very distinct and exacting penmanship architects always have. But I also really enjoy their three-dimensional views of things — you can talk to an architect about space in a way you can't even to an interior decorator. They can look at an empty lot and imagine things like the effects of light on a skyscraper and so forth, and it's not too far afield from what we do in the operating room in terms of spatial predictions and formulations.

Q: What are your hobbies?

A: I'm an avid reader. I'm a jogger, not a runner, but I do like being outside. We didn't do as much hiking when we lived in the Pacific Northwest as we should have because the kids were kind of young, but I do like that kind of stuff. I don't camp though — I'm too old to sleep on the ground — but hiking is great.

Q: What is your vision for the Cardiac Center?

A: Joe Rossano [MD, Chief of Cardiology] and I are in lockstep on this. We have really big plans for the Cardiac Center. We want the Cardiac Center to be the destination where you come to have the highest level of expertise across the entire spectrum of congenital heart care — where you have access to novel therapies, devices, investigative trials that represent the vanguard of our field. There are a lot of great cardiac centers in the world, but there are very few places like CHOP that have the individual intellect, the drive and the desire to solve unanswered questions. Only a place like CHOP can hope to find those answers and, in fact, change the game. Our job in leading the Cardiac Center is to formulate a larger list of fundamental questions and leverage the talent, the relentless drive for scientific inquiry, and the focus of the Cardiac Center to solve these questions in a collaborative way.

A challenge for us will be in narrowing this list down and determining which areas are going to be our focus for the next five to 10 years. Where can we make the greatest impact? What questions are we uniquely positioned to solve? We want to be the place where people will come to get the kind of care that is available nowhere else in the world.