Researchers Reveal Mechanisms of a Fundamental Activity in Cell Biology 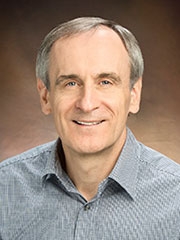 Gerd A. Blobel, MD, PhD Researchers have discovered key mechanisms and structural details of a fundamental biological process—how a cell nucleus and its chromosomal material reorganizes itself after cell division. The new findings in chromosomal architecture and function may offer important insights into human health and disease.

“During mitosis, as a cell divides into two daughter cells, virtually all the genes are temporarily turned off, and the intricate structures in chromatin fibers, the substance of chromosomes, are disrupted,” said study leader Gerd A. Blobel, MD, PhD, who holds the Frank E. Weise III Endowed Chair in Pediatric Hematology at Children’s Hospital of Philadelphia (CHOP). “After mitosis, the daughter cells faithfully rebuild the complex chromatin structures within each cell nucleus.”

In their study, published Nov. 27 in Nature, Blobel and colleagues describe the biological structures and dynamic forces that drive chromosome reorganization after mitosis.

Blobel said that, despite the critical importance of the cell cycle, in which cells grow and divide, few scientists previously investigated the mechanisms of chromatin rebuilding. “It’s long been an open question in biology of exactly how the genome is organized in the nucleus. All the DNA bases in the genome of one cell, if uncoiled into a straight line, would extend for two meters. Yet this material is confined into a tiny space within each cell nucleus, and requires highly organized packaging.”

Blobel and co-corresponding author Jennifer E. Phillips-Cremins, PhD, of the Department of Bioengineering at the University of Pennsylvania’s School of Engineering and Applied Science, brought their respective teams together with colleagues from Pennsylvania State University, led by Ross C. Hardison, PhD, an expert in gene regulation and Blobel’s longtime collaborator. The first author was Haoyue Zhang, PhD, of CHOP.

The research team performed their experiments in blood-forming cells from a well-established mouse model. They used sophisticated techniques called high throughput chromosome conformation capture (Hi-C) that detect and map interactions across three-dimensional space between specific sites in chromosomal DNA. These maps also allowed the scientists to measure such interactions at different time points in the cell cycle. In all, the tools detected roughly 2 billion interactions during mitosis and thereafter, when the daughter nuclei are rebuilt.

The study detected the formation of structures in chromatin: the appearance and expansion of transcriptionally active and silenced compartments; the creation of contact between regulatory regions of the genome; and changes in so-called architectural proteins called CTCF and cohesin that help sculpt the genome. “Our findings describe a dynamic hierarchical framework of the sequence by which chromosomes rebuild themselves after mitosis,” said Blobel.

In addition to delineating a crucial process in cell biology, the research delved into what Blobel called “the complicated interplay between chromatin architecture and gene transcription.” Transcription, the conversion of information encoded in DNA into its equivalent in RNA, temporarily stops during mitosis, but reactivates thereafter in the daughter cells. Because gene mutations that disrupt normal genome architecture or transcription can play a key role in disease, better understanding of chromatin architecture has potential clinical importance.

To take one example, researchers at CHOP and elsewhere have investigated cohesinopathies—defects in cohesin that cause subtypes of multisystem genetic disorders such as Cornelia deLange syndrome. “Abnormalities in chromatin-related structures are relevant to disease, so one implication of our study is that diseases that affect chromatin structures should be viewed through the lens of the cell cycle,” said Blobel.

In summary, added Blobel, “the new study offers important insights into fundamental aspects of a key process in biology---chromatin organization over space and time.”

In addition to his CHOP position, Blobel is also on the faculty of the Perelman School of Medicine at the University of Pennsylvania. Co-authors from Penn Bioengineering with Phillips-Cremins were Daniel J. Emerson, Thomas G. Gilgenast and Katelyn R. Titus. Penn State co-authors from Hardison’s program were Cheryl A. Keller and Belinda Giardine.