Published on Apr 15, 2019 in Neonatology Update 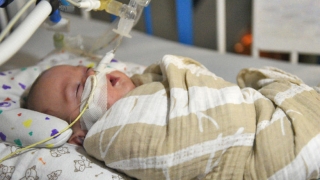 Born at just 24 weeks and 1 day, RD was an extremely preterm female and at the edge of viability. Weighing only 600 grams at birth and without exposure to antenatal steroids, she required significant neonatal resuscitation, including intubation, and surfactant.

Early in her life, she continued to struggle and required high frequency ventilation. On her tenth day of life, she was diagnosed with a coagulase-negative Staphylococcus bacteremia. Complicating her clinical course was a large patent ductus arteriosus that was ligated on DOL 20. However, postoperatively she developed ventricular dysfunction and pulmonary hypertension for which RD was transferred to CHOP’s Newborn/Infant Intensive Care Unit (N/IICU) for further management on DOL 22.

At CHOP, RD continued to need significant respiratory support via invasive mechanical ventilation. Ultimately, she was diagnosed with bronchopulmonary dysplasia (BPD) and eventually followed primarily by CHOP’s Newborn and Infant Chronic Lung Disease (NeoCLD) Program. She suffered a few setbacks, including a severe form of late onset group B streptococcus (GBS) sepsis at 2 months of age followed by recurrent GBS bacteremia at 3 months of age; during this time she needed a substantial amount of support including high frequency ventilation and inhaled nitric oxide.

Kathleen Gibbs, MD, Medical Director of the NeoCLD Program, was on service when RD developed her first GBS infection and later remarked, “It was thanks to our exceptional nurses who initially identified the signs of infection in RD that evolved rapidly — over the course of an hour. Because of this, we were able to start antibiotics immediately. There’s no question in my mind that this diligent attention to subtle changes in her clinical condition contributed to saving her life.”

Following a DART steroid course at 4 months of age, RD was successfully extubated to CPAP. However, she remained on high noninvasive settings that required months of slow titration. Screening echocardiograms were negative for pulmonary hypertension. By her eighth month of life, she was able to transition to a low-flow cannula.

Given her severe illness and chronic need for respiratory support, RD benefitted immensely from the NeoCLD Program’s multidisciplinary approach to care. Diligent interventions from her physical and occupational therapists ensured that although delayed, she was able to make great strides in development. While she was not able to take full oral feeds, speech therapy was consistently involved to maintain oral skills and interest.

According to Gibbs, “Our team had weekly discussions related to the balance of risks and benefits in recommending a gastrostomy tube placement in RD prior to discharge. Ultimately, the input from our therapists was such that we felt her progress toward achieving full oral feeds was excellent and that it would be safe to discharge home with a combination of oral and nasogastric feeds. RD then benefitted from CHOP’s very well-established educational program teaching parents how to care for infants at home on oxygen and nasogastric feeds.”

Just shy of 9 months of age, RD was able to go home with her family on supplemental oxygen and nasogastric feeds with small PO attempts. She will continue to be followed by multiple CHOP subspecialists as an outpatient, including the chronic lung disease follow-up clinic, which combines Pulmonology and Neonatal follow-up, as well as Speech and Language Therapy, and Nutrition. Additionally, her family will benefit from telemedicine meetings where members of the Neonatology medical team are able to video conference with families of medically complex patients.

RD is a success story in many ways. As an extremely preterm infant she was able to overcome many setbacks. Despite the diagnosis of severe CLD, she avoided many major surgeries common in this population, including tracheostomy, Nissen fundoplication, and gastrostomy tube placement. However, she remains technology dependent on oxygen, a pulse-oximeter, and nasogastric feeds and will likely remain medically fragile and complex for a number of years. She will require close outpatient follow-up, particularly in regard to her neurodevelopment.

This story highlights that with diligence to good clinical care and abundant patience, patients with severe CLD will improve and can thrive. It should always be remembered that despite the enormous progress these patients make, this population remains medically fragile and is at particular risk for deterioration from common viral illnesses. This case study shows how our approach to the care of an infant with severe CLD is both multidisciplinary and individualized to the specific needs of each patient.