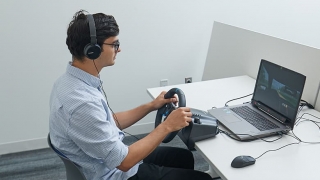 Calling all future drivers — and the caregivers who hold their breath every time their children borrow the car keys: Now, before getting a license, teens can assess their driving strengths and areas for improvement with a technology offered at multiple Children’s Hospital of Philadelphia primary care practices throughout the Philadelphia and South Jersey region.

Thanks to a $4 million gift from NJM Insurance Group, teens can visit their primary care doctor and experience a 12-minute virtual driving assessment (VDA) — the first of its kind in the world.

The technology was pioneered by Flaura Winston, MD, PhD, founder and scientific director of the Center for Injury Research and Prevention (CIRP) at CHOP and Diagnostic Driving Inc. It was initially piloted and validated with more than 40,000 driver’s license applicants with the Ohio Department of Public Safety. Given its data-backed success, NJM was thrilled to introduce and scale the technology at CHOP.

“NJM’s support of CHOP and the VDA is a natural progression to our commitment as a safety-focused insurer and continues NJM’s legacy in supporting the communities we are privileged to serve,” says Mitch Livingston, NJM President and CEO.

“NJM has been a fantastic partner,” Winston says. “They came in with shared values, and we would not be able to do this without their support.”

Teens can take the assessment starting at age 15 and continue to check their skills over time. Seated at a computer with a realistic steering wheel and pedals, drivers-to-be fill out a brief survey about their driving experience and then “drive” along a simulated course that includes some of the most common serious crash situations, such as hazards involving traffic lights, pedestrian crossings and additional surrounding vehicles.

Upon completion, the program emails users a personalized report of their strengths and weaknesses, with links to resources to further hone and develop their driving skills. The technology’s potential is limitless: Winston is already thinking about iterations that would empower teens with disabilities, like neurodevelopmental differences.

The program has reached more than 2,000 teens since 2021 and is poised to expand to 20 primary care practices throughout the region by the end of this year.

“If you want to do one thing that will likely make a difference in keeping your child safe, it’s this,” says Winston.

But don’t just take it from the grown-ups. “The driving test is a great way to practice driving without the dangers of driving in a real car,” said one teen user. Or, as another put it: “It was really cool.”