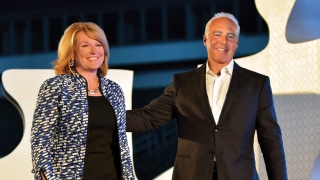 This past fall, high school senior Ben Hartranft’s classmates crowned him homecoming king. It’s hard to imagine that this outgoing teen was nonverbal for the first two years of his life. At that point, his parents brought him to Children’s Hospital, where he was diagnosed with autism spectrum disorder.

For the last 16 years, physicians and speech therapists at CHOP’s Center for Autism Research (CAR) have helped Ben reach the level he’s at today. Ben’s experience at CAR has included another important component: He has participated in at least six research studies, part of an extensive research program that is helping CAR find more effective treatments.

Even more kids like Ben will flourish, thanks to a recent $1 million donation from the Eagles Charitable Foundation to support autism research and programs at CHOP. At the inaugural Taking Flight for Autism event where the gift was announced, Eagles players, coaches and front office executives joined approximately 700 guests to talk football and hear from Eagles Chairman and CEO Jeffrey Lurie; former Eagles quarterback Rodney Peete and his wife, Holly Robinson Peete, who shared their family’s experience raising a son with autism; and others. An additional $320,000 was raised at the event.

“There is a lot we all can still learn about autism,” says Lurie, “and that is why we believe in the importance of providing support to leading institutions like CHOP who are doing amazing work in this area.”

“The greatest challenge to understanding autism is the broad variety of symptoms and underlying causes that we see in people on the spectrum,” explains CAR Director Robert Schultz, PhD. “We need to study the biology and behavior of tens of thousands of people with and without autism. This gift and research volunteers such as Ben and his family are making advances possible that were unimaginable when CAR began nine years ago.”

After becoming high school royalty, Ben brought a video of the ceremony to CAR to share with the staff. There’s something else he’s happy to share: his knowledge. “I love helping other people understand what it’s like to be me,” he says.