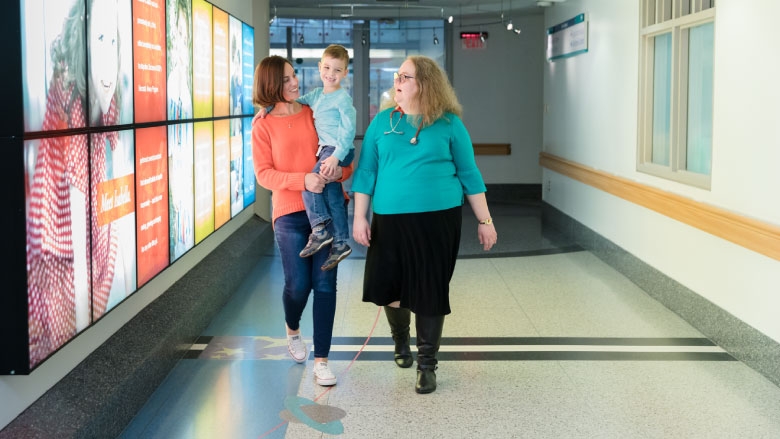 While Tyler Benscoter, 6, is all smiles now, his 18-month wait for a heart transplant was stressful for his family. Center for Palliative Care physician Jennifer Hwang, MD, supported the family — Tyler’s mom, Danielle, in particular.

Children’s Hospital of Philadelphia is overflowing with stories of triumph over disease, fixing broken bodies, healing through breakthroughs.

But sometimes, illnesses can be particularly challenging to treat or the hospital’s collective expertise is not enough to save a child. That’s when the Justin Michael Ingerman Center for Palliative Care team, CHOP’s palliative care program, steps in to help families.

The Center for Palliative Care care is multidimensional. There are physicians, nurses, social workers, a child life specialist, an art therapist, a chaplain and bereavement counselors. They begin to help when a family receives a life-threatening diagnosis and offer support through the progression of illness, whatever its outcome. It’s more than decision-making support, managing symptoms or a referral to hospice. In fact, more often than not, the Center for Palliative Care works with families for months — or even years — rather than just near the end of a child’s life.

“They walk with you,” is how Graciella Dominguez, who lost her son, Alex, last April, describes her family’s experience with the Center for Palliative Care.

Waiting for a new heart

That walk can have a happy ending. For example, every family that has a child waiting for a heart or lung transplant is offered Center for Palliative Care services.

The Benscoter family was introduced to palliative care after their son, Tyler, was listed for a heart transplant.

Tyler was born with a severe congenital heart defect. Despite three surgeries, his heart began to fail when he was 3½. To buy time while he awaited a donor heart, Tyler had a device implanted to take over his heart’s work, and he went home. The wait lasted 18 months.

“Transplant gives you so much hope and so much fear,” says his mother, Danielle. “It’s the start of the rest of his life or a time to say goodbye.”

It was during Tyler’s twice-monthly, day-long visits to CHOP when the Center for Palliative Care’s help was especially beneficial to Danielle. “We had plenty of great people from the Cardiac Center helping with his medical diagnosis and plan of care,” she says. “The Center for Palliative Care was familiar with that, but they cared for us from the emotional and mental standpoint.”

The Center for Palliative Care physician Jennifer Hwang, MD, was Danielle’s anchor during those anxious months of waiting. “She has a demeanor that invites you to talk about your thoughts and feelings,” Danielle says. Hwang helped Danielle and her husband, Joe, decide what to tell their older daughter, Sophia, keeping her informed but not scaring her.

“Having an ill child puts enormous stress on families,” says Hwang. “Our team provides support defined how the family defines it. For Danielle, I’d ask, ‘How are you?’ since the doctors and nurses were focused on Tyler. I tried to make space for her to talk about the hard things.”

Finally, a heart became available. After a 14-hour surgery, Tyler had his new heart, and a year later, he’s a happy, active first-grader.

“The biggest benefit we got from the Center for Palliative Care was the emotional support,” Danielle says. “I’m a person. He’s a person. We’re more than just his heartbeat.”

After Michele Metzgar’s 8-month-old baby, Shane, was diagnosed with a rare and life-threatening cancer, her concern extended beyond her sick son to include her two older children, Chase, then 8, and Ella, 3.

“Once we understood that Shane’s cancer was terminal, I asked how to help prepare our older children for what was happening,” Michele says. “My concern was that not dealing with their emotions could lead to disruptive behaviors and bad habits.”

“During one visit, Kelly took Polaroids of Chase making different faces,” Michele remembers. “Then he could put up a picture to tell us how he was feeling on a particular day.”

As Shane’s health deteriorated, the Center for Palliative Care’s social worker, chaplain and bereavement specialist helped the family prepare for his death and plan his funeral, “so we wouldn’t have to make all those decisions in the midst of our grief,” Michele says.

Shane was 19 months old when he died, peacefully, at home. Goldin helped Chase and Ella decide how they wanted to say goodbye, and both chose to see and hold Shane one more time. Goldin visited Chase and Ella regularly for the next year, and as needed beyond that.

“There’s still a lot of grief, even three years later,” Michele says, “but because of the Center for Palliative Care team’s work, we’re able to talk about it. Kelly gave Chase a vocabulary to discuss these feelings and has continued to work with Ella as her grief changed as she’s gotten older. They’re able to live their lives as normally as they can because of Kelly.”

When there is no cure 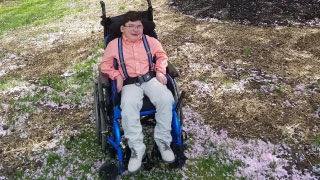 Alex Dominguez For the first 10 years of Alex Dominguez’s too-short life, he managed to find joy despite complex and serious medical problems. His parents, Graciella and Alexander, began bringing him to CHOP from their West Orange, N.J., home soon after his first birthday to be cared for in the 22Q and You Center for those with chromosome 22q11.2 deletion. Alex also had cerebral palsy, nerve damage and developmental delays due to a brain malformation, and an extraordinarily rare condition called CEDNIK. Despite being nonverbal, Alex was a charmer who loved music, books and interacting with people.

Then, in fall 2017, his condition began deteriorating. Alex lost muscle control and the ability to breathe on his own. During one stay at their local hospital, a doctor asked: Do you know what you want for Alex? “That was our ‘aha’ moment,” Graciella says. “We knew we needed to act in his best interest and not from any selfishness on our part.”

The Dominguez family reached out to the Center for Palliative Care. 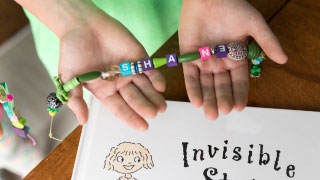 PACT child life specialist Kelly Goldin, CCLS, CTRS, used art projects, like stringing beads to symbolize staying connected to Shane Because of Alex’s complexities, he saw numerous specialists at CHOP. The Center for Palliative Care members were instrumental in streamlining communication between his many clinicians and his family. When Alex was an inpatient at CHOP, the Center for Palliative Care physicians Shefali Parikh, MD, and Victoria Johnson, DO, spent time with the family and care team.

“They were discussing ideas,” Graciella says. “Should they trache him and put him on a ventilator? Are we going to cause him more harm? As parents, you have to make that call. When does the ordinary become extraordinary?”

Working with the Center for Palliative Care members, “The path became evident,” Graciella says. “They never told us what to do. They were instrumental in having us decide on our own.”

There would be no mechanical interventions to prolong the inevitable. Alex would come home for his final days.

A full team on your side

Three weeks later, “Alex passed away in my arms at home, with us,” Graciella says.

“I don’t know how we would have survived without the Center for Palliative Care those last few months. They treated him with such dignity, kindness and compassion. Losing Alex was our worst nightmare, but we know he was cared for so well. It was a huge comfort.”

The death of a child is difficult to talk about. Brad Ingerman knows this all too well.

His son, Justin, was a 23-year-old law student when he stopped breathing during a cab ride and went into a coma. Five days later, after doctors determined he had suffered extensive and irreversible brain damage, his family made the difficult decision to discontinue life support. There was no palliative care department at the hospital where Justin received care.

“Supporting palliative care is not in the top three causes for children’s hospitals,” Ingerman says. “People want to cure cancer or stop heart disease. No one wants to talk about children who are dying.”

Ingerman is in awe of families that struggle with life-threatening illnesses for five months or five years — not five days, as his family did. His admiration for the Center for Palliative Care staff knows no bounds. “The commitment of the staff is totally amazing,” he says.