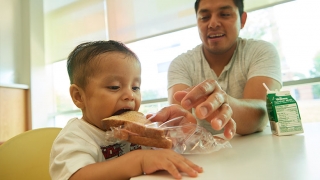 “We didn’t have time for lunch before we left,” Osiel says.

No worries. While Lucia was being checked, Elizabeth and Sebastian were eating lunch — a free, healthy lunch provided by Children’s Hospital of Philadelphia as part of its Complete Eats summer meals program. Complete Eats is just one of more than 100 health-related programs CHOP offers in the community. “This was such a nice surprise,” Osiel says.

2019 marked the second full summer of Complete Eats, a partnership between CHOP and the Archdiocese of Philadelphia, which has been a longtime provider in the U.S. Department of Agriculture’s free summer meal program. It’s a way for CHOP to help ensure some of the approximately 130,800 Philadelphia children living in poverty and at risk for hunger — especially in the summer when they can’t take advantage of free meals at school — have something to eat. 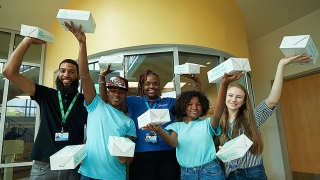 Meals are distributed by interns with CHOP Career Path, a program that helps young adults with chronic illness and/or disabilities or who were in foster care bridge the gap between high school and the working world. With no income threshold, the program gives boxed lunches to any child 18 and under who wants one. While the federal government pays for the food itself, CHOP foots the bill for related research and administrative costs. Families also learn how to find other free meal sites.

Emergency Department physician Danielle Cullen, MD, MPH, MSHP, who spearheaded the program and has guided its expansion, is making sure Complete Eats is having its desired impact. Families are asked to fill out a survey about the program’s effectiveness and whether they have enough food at home to live a healthy lifestyle.

“We found a staggeringly high rate of reported food insecurity among our survey respondents — more than 31% overall. That’s higher than in Philadelphia as a whole,” Cullen says. “More than 80% of respondents say they plan to use the summer meals program again, either at CHOP or in their community. It proves how impactful this program can be for our patients and families.”