Brain development is one of the most complicated processes that occurs during in utero development. During fetal life, the developing brain is normally exposed to lower oxygen levels than are present in ambient air. However, when there is an even lower amount of oxygen than expected, this can lead to significant brain injury. Hypoxia can affect 1 to 6 in 1,000 pregnancies each year. Problems from hypoxia can include developmental delays, learning difficulties, autism and epilepsy. Brain magnetic resonance imaging (MRI) shows that there is injury to the brain’s gray and white matter.

The causes of hypoxia are variable and can occur chronically from conditions that cause placental insufficiency, congenital heart disease, or acutely from placental abruption, cord compression or uterine rupture

After birth, we usually provide these children with comprehensive supportive care to treat any neurological complications. This would include developmental support, early intervention therapies, or treatment of seizures. However, we still do not have specific therapies that can help improve or prevent neurodevelopmental disease.

There are some limitations to current models. So, to better understand how low oxygen levels affect brain development, we have crafted a novel preclinical model of acute hypoxic injury in mice. In this model, we have shown deficits similar to long-term neuroanatomical and behavioral deficits seen in children with hypoxic injury. While we have been studying mice, we have used similar studies used in humans to be able to translate findings. This includes working with Neuropathology and Neuroradiology. Brain MRI and histology shows these mice have white and gray matter injury similar to what is seen in humans. We are also working to better understand the more subtle differences in behavior and learning in children with hypoxic brain injury by comparing multiple model conditions.

Goals for the future

By trying to model human hypoxic conditions in mice more precisely using a combination of state-of-the-art molecular biology, metabolomics and proteomics techniques, we aim to:

We will then study all our findings in patients with different kinds of hypoxic injury and other forms of in utero brain injury. 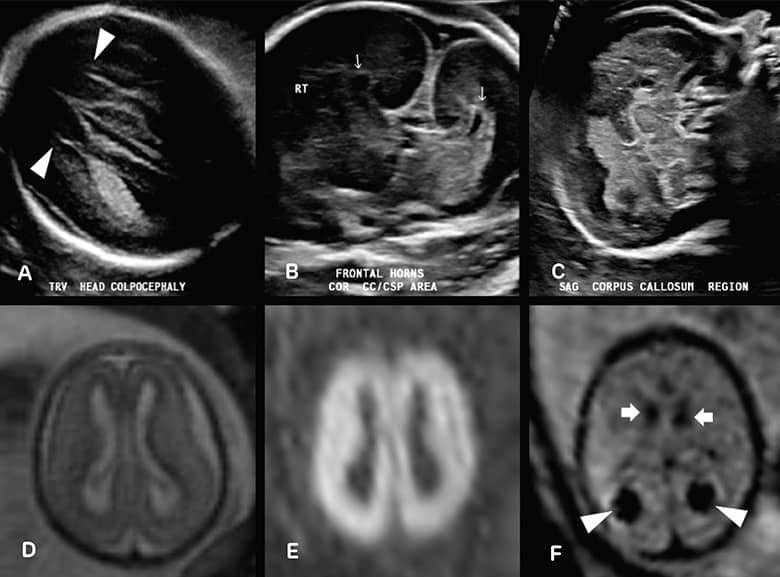 Above images: 22-week fetus with absent cavum septi pellucidi. Transverse US image of the lateral ventricles (A) demonstrates a parallel configuration of the ventricles with a pointed configuration of the anterior horns (arrowheads), consistent with colpocephaly. Coronal US image (B) through the lateral ventricle frontal horns demonstrates absence of the cavum septi pellucidi and an abnormal “trident” configuration of the frontal horns (arrows). Midline sagittal US image (C) reveals no identifiable corpus callosum. The constellation of findings are characteristic of complete agenesis of the corpus callosum.

Prenatal Diagnosis and Care of Agenesis of the Corpus Callosum

Care of agenesis of the corpus callosum involves a multidisciplinary approach, from prenatal consultation to delivery and long-term care coordination with various specialists.

The Many Faces of PHACE Syndrome

The earlier PHACE syndrome is diagnosed, the better the chance to quickly intervene and reduce long-term consequences. A few clues can aid in early detection.

In fetuses with open spinal dysraphism, the risk of talipes is increased with an MMC sac, and a larger sac may result in additional injury through mechanical stretching of the nerves.