Figure 1: From Liu GT, Volpe NJ, Galetta SL. Liu, Volpe, and Galetta’s Neuro- Ophthalmology: Diagnosis and Management. 3rd ed. London: Elsevier Publishing; 2019:438, with permission. Case: A 10-month-old female infant was referred to the Neuro-ophthalmology clinic at Children’s Hospital of Philadelphia for a new-onset lid ptosis and pupillary miosis on the right side. (See Figure 1). There was no history of birth trauma. Vision, eye movements, fundi, and general examination were normal.

Discussion: Anisocoria is a frequent referral and chief complaint in the ophthalmology clinics at CHOP. Most of these patients are diagnosed with physiologic anisocoria and followed conservatively without need for further evaluation.

However, the most concerning condition in the differential diagnosis of a child with anisocoria is Horner syndrome, a loss of the sympathetic tone to the eye (oculo-sympathetic paresis).

The typical presentation of Horner syndrome includes unilateral ptosis and miosis. Less commonly noted findings include facial anhidrosis and mild lower eyelid ptosis (elevation). The generally subtle findings of the syndrome, and the fact it does not impact vision, can delay the diagnosis and the time needed to explore its serious potential causes.

Horner syndrome reflects a remote process, interfering somewhere along the sympathetic chain that runs from the hypothalamus in the brain, down the cervical spinal cord, across the upper chest, returning up along the anterior neck/carotid plexus, and back to the eye. The sympathetic neuron chain releases norepinephrine (NE), a pupil dilator, and when it is not present, the pupil remains small, and the upper lid droops.

The differential diagnosis of Horner syndrome in children is different than adults and includes neuroblastoma and other upper chest/lower neck masses, carotid and brainstem lesions, and brachial plexus birth trauma, all of which can damage the sympathetic chain. In the largest published series of pediatric patients with Horner syndrome—published by CHOP Ophthalmology—no cause was found in 36%. Neuroblastoma (9%) and neurologic neoplasms (9%) were the next leading causes.

Children in our practice who are suspected to have Horner syndrome undergo an eye drop test. Ten percent cocaine eye drops are used for patients under age 2, and apraclonidine (AC) eye drops for older patients (apnea, drowsiness, and unresponsiveness can occur in young patients with AC application). Cocaine drops block the reuptake of NE at the sympathetic nerve terminal to the iris dilator muscle, and AC acts as an agonist to the receptors of the iris dilator muscle, which are hypersensitive in Horner syndrome due to denervation. Application of cocaine drops will dilate the unaffected iris but not the Horner iris. AC will have the opposite effect; the Horner iris will dilate, whereas the unaffected iris will not.

When a Horner syndrome is confirmed with cocaine or AC and/or is very obvious on exam, an imaging evaluation should include MRI of the head, neck, and upper chest with and without contrast, as well as MRI-angiogram of the neck. In case an abdominal neuroblastoma has metastasized to the sympathetic chain, the abdomen, along with the neck and axilla, should be palpated for masses. Additionally, urine catecholamine metabolite screening (Vanillylmandelic acid and homovanillic acid, VMA/HVA) is sometimes completed because excess production of these catecholamines and their metabolites is common in neuroblastoma. If no cause is found, the patient will typically be observed, and if no worsening or new symptoms arise, no serial imaging will be pursued.

In this case, cocaine caused dilation of the unaffected left pupil, but not the smaller right one, where the lack of NE in the postganglionic synapse resulted in dilation failure. This confirmed a diagnosis of Horner syndrome in the infant’s right eye. 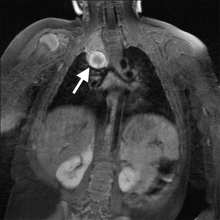 Figure 2. Arrow shows mass. From Liu GT, Volpe NJ, Galetta SL. Liu, Volpe, and Galetta’s Neuro-Ophthalmology: Diagnosis and Management. 3rd ed. London: Elsevier Publishing; 2019:438, with permission. Imaging was completed, and this child was found to have a responsible mass at the right lung apex, affecting the second order neuron in the sympathetic chain (Figure 2, arrow). The mass was removed surgically, and the pathology was consistent with a low-grade neuroblastoma. She did not need chemo- or radiation therapy, and has done well. The Horner syndrome has persisted.

Contributed by: William Anninger, MD, Robert A. Avery, DO, MSCE