A longtime supporter’s donation will propel revolutionary advances in the emerging field of lymphatics. 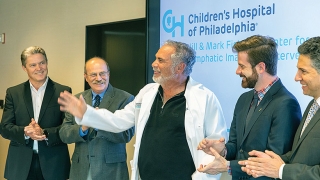 The lymphatics team presented Mark Fishman with an honorary white lab coat. “The ceremony will be part of me forever,” Fishman said afterward. “I eagerly await more discoveries that undoubtedly will come.” When it comes to identifying and studying body systems, it’s the circulatory system that has the longest history, dating back to the Egyptians in 1600 BC. It took until the 1600s for the lymphatic system to be described somewhat accurately. In the 3,200 years in between, the musculoskeletal, nervous, GI and respiratory systems were discovered and understood.

Clearly, the lymphatic system has some catching up to do, and Children’s Hospital of Philadelphia is where many new discoveries to treat children with lymphatic disorders are happening.

Now, a generous gift from Jill and Mark Fishman will accelerate our progress. “What Children’s Hospital is doing in lymphatics is revolutionary and can have a huge impact,” Mark Fishman says. “We felt that making this investment in lymphatics would be a powerful way to ensure the hospital’s leadership in this whole new area of medicine.”

30-plus years of supporting CHOP

Mark Fishman was asked to join CHOP’s Board of Trustees 34 years ago, and his affection and admiration grew along with the hospital. He helped guide it through its remarkable expansion and took on leadership of the CHOP Foundation’s groundbreaking campaign, For Tomorrow’s Breakthroughs.

“Outside of my family and friends, Children’s Hospital is the most important thing in my life,” he says. “It’s a special place and will always have a special place in my heart.”

Those feelings led to the Fishmans’ leadership donation. But before they decided to support lymphatics, Mark wanted to learn as much as he could about it.

Just what is the lymphatic system?

Until 2014, there wasn’t much that could be done to diagnose and treat children with lymphatic leaks or flow disorders. Enter the lymphatic team and what will now be called the Jill and Mark Fishman Center for Lymphatic Disorders. Center Director Yoav Dori, MD, PhD, and colleagues developed the first diagnostic test that gave clinicians a clear view of the anatomy and flow of the lymphatic system. Surgeons then determined how to plug leaking lymph vessels using a minimally invasive procedure perfected at CHOP.

Those advances were lifesaving for children like Lucas, who had a rare lymphatic leak disorder that led to fluid buildup in and around his lungs. He was born in New York, but when his parents learned the leading lymphatics program was in Philadelphia, they brought him to Children’s Hospital.

“When the CHOP transport team came, I can honestly say my heart burst. I saw hope,” his mother, Betsy, says. “It’s not that I didn’t have any before, but when I saw the team, I felt a peace come over me. I cried tears of happiness because we were closer to a breakthrough for him.”

Dori led the medical team that sealed Lucas’ leaking lymphatic ducts using tiny metal coils and a special glue as plugs. The process was the first step on Lucas’ path to recovery. 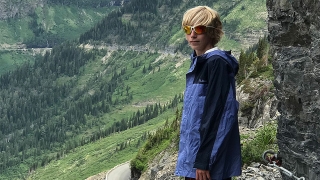 Daniel’s lymphatic system disorder was repaired after CHOP’s genomics team discovered a genetic mutation. As life-changing as it is for the CHOP patients who’ve been treated for lymphatic leaks, that is just the beginning of what Dori sees for the future of the center and for children whose complex conditions require even more advanced, innovative care.

One such patient is Daniel, who went from an active, athletic 10-year-old to a very sick child because of a rare central lymphatic anomaly. His lymphatic vessels were enlarging and multiplying, causing fluid to accumulate around his heart, in his legs and in other parts of his body. Dori performed several rounds of sealing, but more leaks popped up.

“Daniel’s lymphatic system was like a sprinkler,” his mother, Anna, says. “Dr. Dori would fix one leak and another would appear.”

‘They saved the fish’

Daniel’s medical team was running out of options. Dori teamed up with Hakon Hakonarson, MD, PhD, Director of CHOP’s Center for Applied Genomics, to search for a solution.

The genomics team sequenced Daniel’s DNA and discovered he shared a genetic mutation with a young adult at another hospital who also had a severe lymphatic condition. To confirm the gene mutation was causing Daniel’s problems, researchers inserted the altered gene into the embryos of zebrafish, which are frequently used to model genetic diseases. The fish developed similar abnormal lymphatic channels. The next step was to target the mutation with a drug called a MEK inhibitor. Researchers gave the drug to the zebrafish with the structural defect and they developed normal lymphatic vessels. “They saved the fish,” Anna says.

And they saved Daniel. It’s taken more than two years, but the MEK inhibitor has triggered his lymphatic vessels to remodel themselves, which stopped the leaking. Daniel, now an eighth grader, has returned to school and is back shooting hoops, swimming and volunteering at soccer camp.

The breakthroughs potentially born of a collaboration among specialists and researchers from lymphatics, genetics, oncology and cardiology cemented the Fishmans’ support.

“This gift gives us freedom to explore new treatments and innovations,” Dori says. “My vision, as I laid it out for Mark, is that we will eventually have the Division of Lymphology and lymphologists, like we have Cardiology and cardiologists now. He saw the potential of what we could do, how many more lives we could save.”

During his 30 years on the Board of Trustees and now as a member of the Foundation Board of Overseers, Mark Fishman developed an ever-growing passion for research. “Dr. Dori is fantastic and has new and innovative ways of looking at things,” Fishman says. “Supporting his work will help save children. What more can you want?”