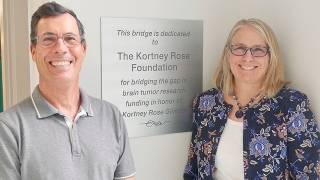 Richard and Kristen Gillette In late 2005, Kristen and Richard Gillette’s daughter was diagnosed with a brain tumor. The Gillettes had to face the bleakest of all realities for parents: More children die of brain tumors than any other cancer, and Kortney’s was the deadliest form. She died in under five months. She was only 9 years old.

The Gillettes’ nonprofit, the Kortney Rose Foundation, was founded with one laser-focused mission: to eradicate pediatric brain tumors by supporting the world’s most promising, collaborative research taking place at institutions such as Children’s Hospital of Philadelphia.

Such efforts were desperately needed. There had been no significant advances in treating pediatric brain cancer in decades. Funding is extremely scarce. The National Cancer Institute allocates less than 4% of its annual $5 billion budget to all forms of pediatric cancer. Pharmaceutical companies see little financial incentive for investment in such a small patient population.

Since 2007, the Kortney Rose Foundation has given more than $2 million to fund research at CHOP. With a goal to support innovative pathways, the foundation has often been the seed funder for new ideas, such as the Children’s Brain Tumor Tissue Consortium, a collaborative, multi-institution research program dedicated to the study and treatment of childhood brain tumors. The program’s operations center is headquartered at CHOP.

The Consortium collects high-quality brain tumor biospecimens and provides free and open access to the data to researchers throughout the world. Since 2013, the Consortium has collected more than 13,000 samples — the crucial, powerful tools that help researchers identify better testing and treatments. One area of exploration is trying to understand the role a specific gene mutation plays in the kind of inoperable brain tumor that killed Kortney.

“What sets the Consortium apart from other biorepositories is not only are the specimens thoroughly genomically sequenced, but all data is available to any researcher anywhere in the world via a first-of-its-kind cloud-based tool, whose development was also supported by the Kortney Rose Foundation, ” says Kristen Gillette. “It’s important for us that researchers work together rather than compete.”

Today, the Consortium’s entire infrastructure is funded through philanthropic giving from donors who are generous, trailblazing and relentless — a description that exactly fits Kristen and Richard Gillette.

The Gillettes are supporters of Children’s Hospital of Philadelphia’s most ambitious fundraising campaign, For Tomorrow’s Breakthroughs. The campaign is in its final year, and there is still time to join us. You can transform children’s lives by making a gift today at chop.edu/giving.