A landmark study on type 2 diabetes in young people, involving researchers from Children’s Hospital of Philadelphia (CHOP) and Penn Medicine, has found that those diagnosed during childhood and adolescence have a high risk of developing serious health complications by early adulthood. These diabetes-related complications, ranging from high blood pressure to kidney and eye disease, accumulate rapidly, and 60% of participants in the study developed at least one complication by early adulthood, while nearly a third had two or more complications. 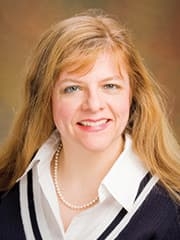 Lorraine E. Levitt Katz, MD The findings, a culmination of the Treatment Options for Type 2 Diabetes in Adolescents and Youth (TODAY) follow-up study (TODAY2), were published in the New England Journal of Medicine.

“The results of this important study show that type 2 diabetes in children is a severe disease – more severe than in adults – and so we need to treat the disease aggressively at an earlier point on the timeline, ideally at the pre-diabetes stage,” said Lorraine E. Levitt Katz, MD, Director of the Center for Human Phenomic Science at CHOP, Professor of Pediatrics at the Perelman School of Medicine of the University of Pennsylvania, and Principal Investigator of the CHOP site for the TODAY Trial. “We also must explore better therapeutic options for young people with type 2 diabetes to prevent the disease from worsening and leading to serious complications.”

TODAY2 involved 500 participants from the original TODAY study, which enrolled patients from 2004 until 2009. When patients enrolled, they were between the ages of 10 and 17, had been diagnosed with type 2 diabetes for fewer than two years, and were overweight or had obesity.

Beginning in 2011, researchers began enrolling patients in the follow-up TODAY2 study, which monitored patients each year for signs of diabetes complications, including heart disease, kidney disease, diabetic foot complications, and other health events. Participants were monitored for eye disease once during the original TODAY study and a second time at the end of TODAY2.

Researchers found that 67% of participants developed high blood pressure, nearly 55% had kidney disease, and 51% had eye disease. Almost a third of patients showed signs of nerve disease. Although the initial study had divided patients into three treatment categories – metformin alone, metformin plus rosiglitazone, and metformin plus an intensive lifestyle intervention – the data from TODAY2 showed that rates of disease were similar among treatment groups.

As a trial site in the TODAY study, CHOP enrolled 70 patients in the original study, and 53 of those were still being monitored when the TODAY2 study finished in 2020. Learn more about the TODAY2 findings in this release from the NIH.