A 25-year-old G2 P1 was referred for evaluation of a fetal lower urinary tract obstruction. Initial ultrasound evaluation at 20 weeks gestation revealed a male fetus with a significantly enlarged bladder, severely decreased amniotic fluid volume (oligohydramnios) and bilateral hydronephrosis. The sonographic appearance of the fetal bladder was that of a “keyhole sign,” indicating a proximal urethral obstruction such as posterior urethral valves or urethral atresia. No other anomalies were visualized. The fetal echocardiogram was normal. 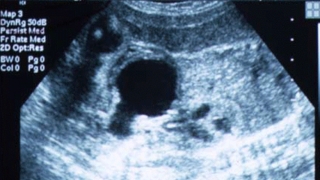 The family chose to proceed with an evaluation to assess renal function and to discern if indeed there was a fetal lower urinary tract obstruction. Three ultrasound guided bladder drainages were performed at intervals two days apart.

Chorionic villous sampling was also performed to rule out a fetal chromosomal anomaly that occurs in 6 to 8 percent of such cases. Results revealed normal male chromosomes (46, XY). The urine electrolytes and proteins revealed a borderline pattern. However, underlying functional renal asymmetry was suspected based on the sonographic appearance of the kidneys.

One kidney was suspected to be damaged as indicated by its echogenic appearance and the presence of several cysts within the renal tissue. The other kidney, however, demonstrated minimal increased echogenicity, had no visible cortical cysts and was presumed to be less damaged. To learn more, an ultrasound-guided needle aspiration was performed to assess function in the more normal-appearing kidney. Urine from this kidney showed only a mild degree of damage with potential for salvage with intervention.

After further consultation about the risks and benefits of intervention, the family decided to pursue vesicoamniotic shunt placement. At 21 weeks gestation, an amnioinfusion was performed to restore amniotic fluid volume to normal, and a vesicoamniotic shunt catheter was placed into the fetal bladder without complication. Follow-up ultrasounds revealed restored amniotic fluid volume and a properly placed and functioning bladder shunt. The rest of the pregnancy was uncomplicated.

Delivery occurred vaginally at 36 weeks following spontaneous onset of labor. The baby had a vesicostomy placed after delivery, followed by correction of the outlet obstruction, which proved to be posterior urethral valves. One kidney was damaged with minimal function, while the other continues to function normally. The child is now thriving, happy and 5 years old.