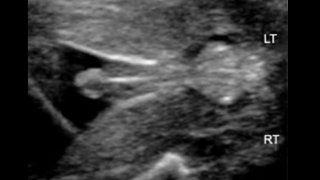 Ultrasound image of normal appearing male genitalia A 42-year-old G8P5116 female of Caucasian descent was evaluated at 22 weeks gestation due to a finding of gender discrepancy between karyotype and ultrasound.

Given this scenario, what diagnoses should be considered in the differential? 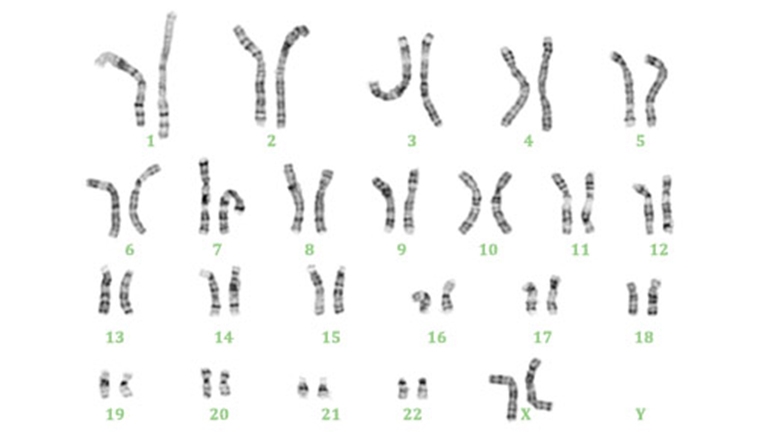 Image of a normal female karyotype. Image provided by the CHOP Cytogenomics Laboratory Repeat amniocentesis, performed at 20 weeks gestation, confirmed the finding of a normal 46, XX karyotype and the presence of normal male external genitalia. Fluorescence in situ hybridization (FISH) studies demonstrated a copy of the SRY gene (sex-determining region of Y) on the short arm of one of the X chromosomes.

The patient had a routine prenatal course and uneventful full-term vaginal delivery of a 3kg infant with normal external male genitalia. All newborn screening tests were within normal limits. A scrotal ultrasound revealed normally appearing bilaterally descended testicles. No Mullerian structures were identified on pelvic ultrasound. Infant and mother were discharged following a 48-hour hospital stay.

Read on below for the answers.

Answers 1 and 2 and 3 might be considered in the differential, with 2 being the most likely. The most common form of congenital adrenal hyperplasia (CAH), 21-hydroxylase deficiency, typically presents with ambiguous genitalia on ultrasound and a female karyotype.

Individuals with 46, XX testicular disorder of sex development (46, XX testicular DSD), which is sometimes still referred to as 46, XX male syndrome, have a female karyotype, male external genitalia, two testicles, azoospermia and absence of Mullerian structures. The majority demonstrate the presence of SRY (sex-determining region of Y) within their genome, most commonly on one of the X chromosomes.

Maternal cell contamination (MCC) is also a possibility, although it commonly manifests as 46, XX/46, XY mosaicism.

The genotype-phenotype discordance in answer 4, androgen insensitivity (AI), is that of a normal male karyotype and normal female external genitalia.