An 11-month old boy presented to the Emergency Department at a local hospital with his parents. 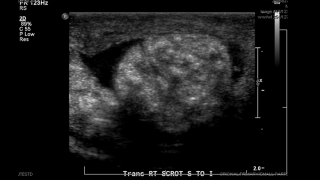 Scrotal mass His parents reported a two-day history of “not acting like himself.” He was less interactive than usual and had a decreased appetite. On this day, he woke up from a nap crying and grabbing the right side of his scrotum. He was taken to a local emergency room and found to have a fever of 101.3 degrees Fahrenheit and WBC of 28. His physical exam was notable for bilateral hydroceles, which had reportedly been present since birth, and echogenic bowel within the right hemiscrotum. There was no evidence of testicular torsion. He was transferred to The Children’s Hospital of Philadelphia (CHOP) to rule out an incarcerated hernia.

Upon arriving at CHOP, his vital signs were stable and his temperature had come down to 100.4 degrees Fahrenheit. He continued to be crying and fussy with one hand over the right hemiscrotum at all times. His abdomen was soft and non-tender with no masses appreciated. His scrotal exam revealed a left descended testicle in normal lie within the scrotum and no palpable masses. The right testicle was palpable and descended. A discretely separate marble-size paratesticular mass could be palpated along the right hemiscrotum. No hernia was detected.

A KUB revealed a heterogeneous cluster of calcifications projecting over the partially visualized right scrotum, but no abnormal intra-abdominal calcifications were identified. In addition to the known bilateral hydroceles, a scrotal ultrasound showed two and possibly three circular, heterogeneous, but primarily hyperechoic partially calcified masses within the right scrotum, completely separate from the testis. No hernia was visualized. 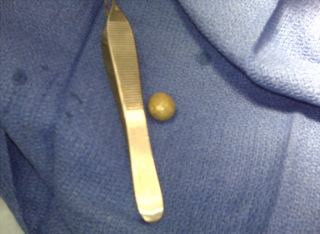 Removed scrotal mass The child was admitted to the hospital and given intravenous antibiotics. He was taken to the operating room for a right inguinal and scrotal exploration.

A completely detached 1.5 cm marble-like mass fell out of the tunica vaginalis sac once it was opened. The processus vaginalis was closed. Frozen sections of the mass were sent to pathology and read as likely meconium with no evidence of malignancy. The final surgical pathology confirmed meconium periorchitis. A thin, fibrous-walled cyst filled with a fibromyxoid material and numerous foci of dystrophic calcification was described. Pigment laden macrophages, fine hairs and rare degenerating squamous cells were also identified in the sample tissue.

Following surgery, the child did well and he was discharged from our clinic.

Meconium periorchitis is a very rare mass-like lesion that results from the infiltration of meconium peritonitis into the scrotal sac through a patent processus vaginalis. The meconium leaks into the scrotum and quickly turns into a fibrous solid mass. While initially soft, the mass develops calcifications over time due to chronic inflammation.

Approximately 60 cases are described in the literature, including a few which were diagnosed prenatally. Although about 25 percent of boys with meconium orchitis are reported to have no scrotal anomaly at birth, many are reported to have had reducible hydroceles, often on both sides, at birth.