As a meaningful partner of Children's Hospital of Philadelphia for many years, Alex’s Lemonade Stand Foundation (ALSF) has made tremendous contributions toward advancing pediatric cancer research here and beyond. 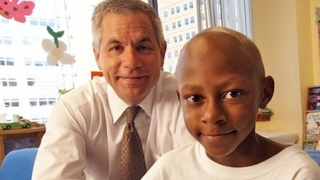 In 2001, Liz and Jay Scott moved their family to Philadelphia to seek treatment for their 4-year-old daughter Alex at CHOP’s Cancer Center.

At a May 2011 event celebrating a $2 million gift awarded by ALSF, the pediatric oncologist who treated Alex celebrated the longstanding partnership: “We are honored that Alex’s Lemonade Stand Foundation has chosen to support Children’s Hospital of Philadelphia, not only because of the deeply personal connection we have had with Alex and the Scott family for many years, but also because our Center for Childhood Cancer Research shares the mission to eradicate pediatric cancer and is one of the few institutions that has the talent, resources and commitment to do so,” said John Maris, MD, who today holds the Giulio D'Angio Chair in Neuroblastoma Research.

Maris is one of many physician-researchers at CHOP whose work has advanced thanks to gifts by ALSF, and he remains focused on better understanding the disease that killed Alex. “We strive to be the world’s leading neuroblastoma research and treatment center as we work to exponentially increase our understanding of this cancer and its underlying biology,” he says.

Using sophisticated sequencing tools, researchers in the Maris Laboratory have identified a protein that offers a likely target for immunotherapy for neuroblastoma. “We have built a strong foundation for developing a completely new and hopefully much less toxic treatment for neuroblastoma, the most common cancer in infants,” says Maris.