When Max, now 4, got a cold in the spring of 2015, it seemed run-of-the-mill — until a strange pattern of bruises showed up on his legs. His mother, Kristy, is a nurse at The Children's Hospital of Philadelphia and immediately knew this was a bad sign. 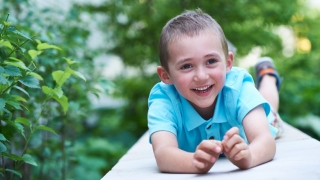 At CHOP, a bone marrow biopsy revealed acute lymphoblastic leukemia, the most common form of childhood cancer. Within 24 hours of diagnosis, Max got a port placed in his chest as an access point for chemotherapy.

The treatment road was a bumpy one for Max, who used to spend his time climbing trees, building monster truck arenas and making pancakes. His first inpatient stay stretched to seven-and-a-half-weeks, and lively Max wasn’t allowed to leave his room for four of those weeks.

“He spent a lot of time doing artwork and making videos,” says Kristy. “He’s gotten significantly better at it! The child life staff was awesome, as were the staff nurses. They made it fun for him. We didn’t want him to lose his childhood.”

All in all, Max endured 10 separate stays at the Hospital, only half of which were planned. Despite everything he went through, eventually Max looked forward to coming to CHOP. “He got to a place where he was excited to go there,” says his father, Michael. “Which wasn’t necessarily a feeling we shared! But it was because he’d get to see the staff.”

Kristy adds, “It was eye-opening to be on the other side of things and see how we as employees can make things easier for families.”

Max was super-heroic, so his family dubbed him Iron Max, his chemotherapy port the equivalent of the metal disk in Iron Man’s chest. Every superhero has an arch-villain to fight. Max decided his foe should be nicknamed Sneaky Leu.

His family is assembling a team, called Iron Max and His Avengers, to take part in the Parkway Run & Walk on Sunday, Sept. 25. The event benefits pediatric cancer research and care at The Children’s Hospital of Philadelphia, and this year Max is a Patient Ambassador. The contribution that Iron Max and His Avengers makes to the Cancer Center will help researchers develop groundbreaking treatments, so that one day no kid is in danger of losing his childhood to cancer.