Megan had acute lymphoblastic leukemia when she was 13 — and when she was 19, it came back. Her treatment included an experimental drug that could be administered at home with the help of CHOP’s Home Care nurses. Megan was a Patient Ambassador for the Parkway Run & Walk in September 2016. 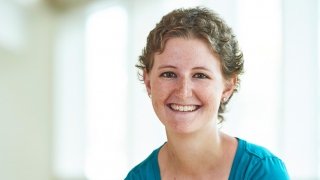 Her 2009 diagnosis was preceded by a fever, weakness, a monthlong sickness that was thought to be mononucleosis, an abscess on her ankle, and a terrible stomachache. “This time,” she explains of the 2015 symptoms, “I was really tired and thought I had a cold. A relapse never came to mind.”

She was in missionary training in Utah at the time, but when her bloodwork revealed numbers that indicated leukemia, her mother, Sue, flew out to get her. Unsure of what to do, Sue called one of The Children's Hospital of Philadelphia’s nurses she had become close with during the first battle with cancer. “She said, “Bring her here!” They returned home to New Jersey and then headed to CHOP, where doctors confirmed that the cancer had returned.

Megan was in the Hospital often over the next several months, and then went to the CHOP Care Network’s Specialty Care and Surgery Center in Voorhees, NJ. “I love the nurses and doctors there,” says Megan.

The cancer “interrupted my life a lot more this time,” she says wistfully. Her hope is to join her twin sister at Brigham Young University in the spring and resume pursuing a degree in psychology.

Megan was a Patient Ambassador for the Parkway Run & Walk in September 2016, an annual event which benefits pediatric cancer research and care at CHOP. The money raised will help more CHOP researchers and clinicians discover and test new cutting-edge drugs.