Born with a heart defect called aortic stenosis, Sarah had two open heart surgeries when she was young. Now 16, she’s an honor roll student who loves art and design.

Hours after Sarah was born, a pediatrician recognized a serious heart murmur. Sarah's parents, Lynn and Bruce, brought her to the Cardiac Center at Children’s Hospital of Philadelphia (CHOP) where she was diagnosed with moderate to severe aortic stenosis. There was a malformation in the valve that allows blood to flow from the heart into the aorta and it wasn't functioning properly.

Sarah spent a week in the Evelyn and Daniel M. Tabas Cardiac Intensive Care Unit (CICU). After careful evaluation, a team of cardiologists, anesthesiologists and surgeons made the decision to delay surgery until Sarah was bigger.

First surgery as a baby

Three-and-a-half months later, she returned to the Cardiac Center where Thomas Spray, MD, Chief of the Division of Cardiothoracic Surgery, performed a surgery called the Ross procedure. In this operation, the aortic valve is replaced with the patient's pulmonary valve. The pulmonary valve is then replaced with one from a donated organ.

Doctors told Sarah's parents it was possible she would need another surgery before she turned 4. She would also return to the Hospital regularly for outpatient checkups. Sarah grew into an active, happy child. At age 5, she took up gymnastics and she was able to perform without restrictions.

"She went for 7 years with no limitation in physical ability," says Lynn. "Then her cardiologists noticed some change."

Children with aortic stenosis have an aortic valve that is too narrow, blocking the blood flow out of the heart, requiring it to work harder than normal.

The Cardiac Center team performed a cardiac catheterization to gather information about Sarah's heart that would help them decide on the proper course of treatment. They determined Sarah was ready for a larger pulmonary valve. During the surgery, the valve was replaced with an adult valve from a donated organ.

After surgery, Sarah recovered in the Cardiac Center's inpatient units. "She had so much personal attention and the facility was beautiful," says Lynn.

The Cardiac Center's child life specialist, who helps children cope with the stress of hospitalization, used teddy bears to encourage Sarah and another little girl to think about their experience.

"The girls cut open the front of the teddy bears," Lynn remembers. "It was such a wonderful exercise for them to think about what they had just been through in a very fun way, without having to discuss anything scary."

Sarah's room was down the hall from the Cardiac Center playroom, where she and another patient watched movies together and played on the computer.

"The second day, as soon as she could walk, she lived in that playroom," says Lynn.

Four days after surgery, Sarah was home. Two weeks later, she was off to her first day of second grade. And shortly after, she was back to gymnastics.

"We did ask her to take it easy on the bars," Lynn, recalls.

Even as a toddler, Sarah was a high-energy child. Her cardiologist at CHOP noticed this, and mentioned to her parents that evidence was building for an association between cardiac problems and other developmental and cognitive issues. He said it was much too early to diagnose Sarah with ADHD, but that they should watch for signs as she grew older.

The advice proved to be helpful. Sarah was diagnosed with attention deficit hyperactivity disorder (ADHD) in second grade. She has an unusual form that also includes anxiety issues. CHOP social workers and psychologists helped the family understand and advocate for her needs at school.

In appreciation, and to make similar support available to families of other cardiac patients, Lynn and Bruce set up a fund to provide a full-time psychologist in the Cardiac Center. The center now has two psychologists. They help families with the transition to life after cardiac surgery and with cognitive issues, such as Sarah’s, that are sometimes associated with cardiac problems. The psychologists also consult with the doctors on how to talk to parents and young patients about what can be frightening diagnoses. 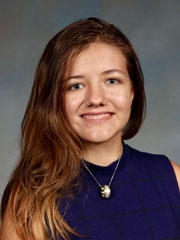 Today, Sarah does competitive gymnastics. She’s an honor roll student, with special interests in science and math. Special support with organization and planning helps her apply her natural intelligence and enthusiasm to perform at a high level.

She also has a passion for painting and fashion design and is considering a career in graphic design. Sarah does volunteer work at an animal shelter and is part of a service club at school that volunteers at two retirement homes and other community resources. She clearly has a big heart, and is not letting anything slow her down.

Sarah visits the Cardiac Center as an outpatient for annual checkups, and will continue to see a cardiologist twice a year. Marie Gleason, MD, is her current cardiologist. “The team at CHOP has been amazing,” Sarah says. Her mother echoes that feeling:

“They’re interested in Sarah as a person, and take time to understand her needs and interests. They treat us like family.”