“A cool little guy” with a personality that draws people to him is how Cameile describes her 7-year-old son, Justin. But Justin, who has cerebral palsy, has communication challenges that make it harder for him to share his gregariousness. Working with the Speech-Language Pathology Department at Children’s Hospital of Philadelphia’s (CHOP’s) Center for Childhood Communication, he found an augmentative and alternative communication (AAC) system that lets him more easily share his thoughts with the world. 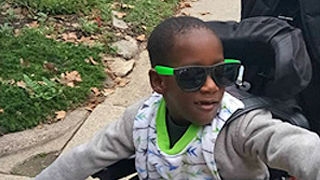 That ability became even more important a couple of years ago when Justin was preparing to start school and needed to feel confident communicating with a larger group of people.

His school, in conjunction with the speech-language pathologists at CHOP, completed trials with multiple AAC devices, eventually narrowing it down to an I-15 Tobii Dynavox eye gaze speech-generating device (SGD) and an Accent® 1400 SGD (Prentke Romich Company) to generate speech for him. Over the course of several weeks, he used the systems during instruction, speech therapy at school, and outpatient therapy at CHOP. Following that, he tried the devices at home for a few more weeks. The assessment process required good communication among all members of Justin’s care team.

The CHOP therapists “were consistently super easy to talk with,” says Cameile. “They routinely invited questions and made themselves available for questions in the clinic as well as via email. I often got answers of questions that I forgot to ask or didn't come to mind during a clinic session, right from the comfort of home.”

At first, a Tobii Dynavox eye gaze system was the preferred choice for Justin’s school therapist. But Justin was not comfortable with it and his athetoid (involuntary, writhing) movements made it difficult for him to maintain the steady gaze the device needs.

Working together, CHOP speech therapist, Carolyn Hirshenhorn, MA, CCC-SLP, and the assistive technology team and speech therapist at Justin's school went back to the drawing board. Eventually they determined Justin could use his hands more efficiently than his eye gaze to access the Accent 1400 with a keyguard to access the touchscreen. He can use it to ask for things or simply talk to his friends, family and doctors.

“The Accent 1400 is perfect for Justin,” says Cameile. “He makes requests and says what he wants when he wants, so he feels free to use it as opposed to being forced to use it.”

The long road to CHOP

When Justin was born healthy at a highly rated hospital in Jamaica, his mother’s home country, Cameile had no inkling Justin would eventually need such high-tech equipment to communicate. She had a normal pregnancy and birth. When Justin was discharged to go home, the pediatrician who usually evaluated newborns was unavailable, so a general practitioner did a cursory exam and sent them home.

The next day, Cameile noticed Justin had a yellowish cast to his skin — and it worsened overnight. Concerned, she took him to the nearest children’s hospital, where he was diagnosed with extreme jaundice. He received a blood transfusion and approximately 10 days of light treatment. He was discharged without a diagnosis.

The treatment had not been enough. By the time he was 6 months old, Justin was showing developmental delays. He was eventually diagnosed with kernicterus, a condition where prolonged exposure to high levels of bilirubin damages the brain.

As a result of kernicterus as an infant, Justin has quadriplegic cerebral palsy; he is unable to move the muscles in his body, especially his legs and arms, smoothly and uses a wheelchair to get around. He also has receptive and expressive language impairments, as well as a speech disorder, due to his muscle weakness, which make verbal communication a challenge.

Cameile wanted a second opinion. On the recommendation of a family member in the medical field, she and Justin, then 2 years old, traveled to Philadelphia and confirmed his diagnosis at Thomas Jefferson University Hospital. When Justin was 4, they were referred to CHOP for additional tests and therapies.

Over the last two years, he has regularly been seen by CHOP’s Cerebral Palsy Clinic, as well as Speech-Language Pathology, Occupational Therapy and Physical Therapy.

‘Family away from family’

Although far from home, Cameile is comfortable and confident she had found the doctors and therapists at Children’s Hospital who can help Justin reach his fullest potential.

“As a mother and parent, you kind of know who has your child's best interest at heart, and I knew CHOP did! CHOP has been a place where Justin and I have found a family away from family,” she says. “From the very first phone call to set up appointments for a clinic, I could tell we were about to begin a journey toward healing and maximum potential of rehabilitation.”

Justin’s primary physical symptom was extreme muscle weakness. Among other issues, it reduced his oral muscle control, making it difficult for him to express himself verbally.

Cameile often relied on interpreting his body language to understand what he wanted to say — and she did not always guess correctly, frustrating both of them. Over the years, Justin tried using a variety of AAC modalities, ranging from low-tech eye gaze boards to high-tech eye gaze devices to improve his ability to communicate.

His current speech-generating device, the Accent 1400, meets his needs for school and at home.

“Now, we make far fewer mistakes in figuring out what he needs,” she says. “It amuses him to use the device to correct me when I am way off. I enjoy that too because he is learning.”