Brock Ott was 2 years old when his parents, Brian and Naidona, began to notice differences between him and other kids his age. Their research seemed to point to autism, but his local pediatrician and a neurologist both dismissed the idea. 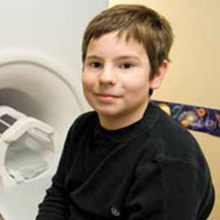 It wasn’t until he was 6 years old, entering first grade, that Brock was diagnosed with an autism spectrum disorder (ASD), a group of complex developmental disabilities that cause problems with social interaction and communication.

The Centers for Disease Control and Prevention (CDC) estimates that autism spectrum disorders affect 1 in every 88 children in the United States. Although ASDs are more common today than childhood cancer, juvenile diabetes and pediatric AIDS combined, little is known about their cause or the most effective treatment.

As ASD diagnoses soar, learning more about the condition has become more pressing than ever. That was the driving force behind the creation in 2008 of the Center for Autism Research (CAR) at The Children’s Hospital of Philadelphia, the largest center of its kind dedicated exclusively to autism spectrum disorders. By enabling earlier diagnoses and developing more effective treatments, CAR hopes to minimize the time families like the Otts spend searching for answers.

Autism is a “spectrum disorder,” meaning that children affected by it show symptoms that range from mild to severe. Brock is on the high-functioning end of the spectrum, with above-average intelligence, but noticeable social, behavioral and language issues. At age 4, he had a 20-word vocabulary when his peers were virtual chatterboxes, and he had trouble with his memory; he couldn’t even remember the names of family members. His parents and family referred to these qualities as “Brockisms.” He would get fixated on particular things. “I think he watched Chitty Chitty Bang Bang 100 times and never got bored,” Naidona says.

Though a sweet kid at heart, he didn’t interact much with other children, didn’t make eye contact or smile, and didn’t want to be touched. He had trouble with the textures of certain foods, talked in a monotone voice and displayed behavior like flicking his fingers and walking on his tiptoes. “When he was little, I would say, ‘OK, I want three hugs today.’ And he would give me three hugs, and that was it,” Naidona says. “It was very awkward for him.” Most troubling were the “catastrophic breakdowns” Brock had when switching from one activity to another. “It wasn’t your typical ‘terrible twos’ meltdown,” Naidona says.

With three older children, the attention devoted to Brock wore on the family at times. “You feel horrible for your child because you feel like they’re not happy,” Naidona says. “You don’t know what to do. And you have the guilt that you’re spending all this time on this child who is so difficult. What about the other kids?”

When Brock was 4, his parents enrolled him in the same New Jersey private school his siblings and father had attended, but the meltdowns were too much for the school to handle. “The teachers at the private school were old-school in that if they saw a child having meltdowns, their response was to crack down, and that just made it worse,” Brian says.

After Brock was asked to leave the school midway through the year, his parents enrolled him in first grade at a public elementary school. It was there he was finally diagnosed with an ASD and began to get autism-specific intervention. Soon after the diagnosis, the Otts learned about CAR. CAR’s mission — helping families living with an ASD — is based on the belief that scientists need to understand the causes of ASDs to enable earlier diagnoses and more effective treatments.

“Brock has participated in any studies he qualified for,” Brian says. “I leave it up to him. His nature is that he wants to help and I encourage that.” One study used cutting-edge neuroimaging techniques and infrared laser eye tracking to determine how differences in Brock’s brain account for some of his social and communication deficits. Using magnetic resonance imaging (MRI), a research group led by Robert Schultz, PhD, CAR’s director and holder of the Regional Autism Center Endowed Chair at Children’s Hospital, found that abnormal neural connections within the brain’s limbic system contribute to difficulties with social relationships, such as face identification, among children with ASDs.

Brock also tested therapeutic video games Schultz developed as a result of this study. By asking the children to match a face with the emotion that person is feeling — say, a frown with sadness — they aim to teach children with ASDs how to read social situations.

Another study led by Timothy Roberts, PhD, vice chair of Radiology Research at Children’s Hospital and holder of the Oberkircher Family Endowed Chair in Pediatric Radiology, uses magnetoencephalography (MEG), an advanced technology that measured the real-time electrical activity in Brock’s brain, to study language impairments. Through that study, Roberts found that children with ASDs process sounds a fraction of a second slower than other children.

After his diagnosis, Brock was placed in a special classroom where he received autism-specific intervention and social skills training. By the end of that school year, Brock’s parents started to see progress. Today, he has been mainstreamed for a number of subjects, and his meltdowns are few and far between.

As Brock continues to participate in new research studies at CAR, he is evaluated each year, yielding reports that help his parents and teachers address new issues as they arise. For example, a CAR re-evaluation identified a weakness with Brock’s language skills, specifically his working memory, which in turn explained why he struggled writing essays. Brock’s teachers have adjusted his curriculum based on this finding, providing him more writing guidance and teaching him how to use outlines.

Hope for a bright future

Today, Brock is an extremely bright kid who devours books and dives headfirst into his passions, which include composting, gardening, making videos with his digital camera, technology and science. “I have seen him come so far. Everyone who’s been around him has seen him grow, and they can’t believe the change,” Naidona says.

Not only does Brock contribute his time to CAR’s groundbreaking ASD research, he has even bigger plans to change the world. “He wants to build a plant that makes fuel from algae, and after that business is successful, he wants to figure out a way to do something positive with used cigarette butts,” Brian says. “He wants to make the world a greener, cleaner place.”