“This is the funniest one you’ve ever heard,” she told the crowd at her family’s annual fundraiser for Children’s Hospital of Philadelphia (CHOP). “Where does a bat go to get clean?” She paused for effect. “A bat tub!”

It appeared to be a simple standup act, but it was in fact an incredible breakthrough for Celi — especially considering that for the first four years of her life, she didn’t say a single word.

‘I knew something wasn’t right’ 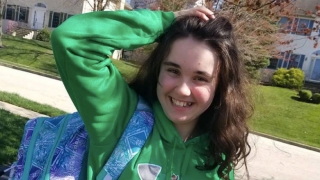 “Celi was never typical,” Megan Schmidt says of her daughter’s early childhood in Orange County, CA. “She didn’t make a lot of eye contact. She never spoke. She didn’t say ‘mommy’ — nothing.”

There were other worrying signs, too: “We would go to Mommy and Me classes, and she was obviously different from the other kids,” Megan says. “She wouldn’t sit in circle time, and she wouldn’t follow directions. I knew something wasn’t right.”

At a checkup when Celi was 2, her pediatrician told Megan he suspected that Celi had autism spectrum disorder. “I got in the car and cried my eyes out,” Megan says. A few months later, as Megan, her husband, Eddie, and Celi were preparing for a long-planned move back to their home state of Pennsylvania, a behavioral pediatrician confirmed the diagnosis — and referred them to Susan Levy, MD, MPH, a developmental and behavioral pediatrician at Children’s Hospital of Philadelphia (CHOP).

For the next several years, Celi came to CHOP regularly for checkups with Dr. Levy and Rosemary Eikov, MSN, RN, CRNP, a nurse practitioner with CHOP’s Autism Integrated Care Program. She also had four to five hours of speech, occupational and applied behavior analysis (ABA) therapy at home, five days a week. The therapists worked closely with Megan to help Celi develop skills like sitting still, paying attention to tasks and following instructions, but the process was tedious — and progress was slow. “We would run drills for hours,” says Megan. “It was exhausting.”

But one day, when Celi was 4, something extraordinary happened. During one of their regular sessions, Celi’s therapist placed a cup on the table. Then she placed a second cup on the table — and Celi said “two.”

It was her first word.

And it was the first of many breakthroughs.

Standing up for autism awareness

Celi continued to work very hard in her therapy sessions, slowly building her vocabulary and becoming more comfortable in social situations. Along the way, she discovered that she had a talent for comedy (“She loves to laugh — she thinks she’s hilarious!” says Megan) and for art (she likes to draw and make 3D clay figures). Celi still has some challenges — having back-and-forth conversations is especially difficult for her — but she is thriving in a mainstream middle school, where she receives support from a one-on-one aide. “She’s a super-happy kid,” says Megan. 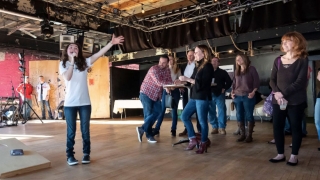 She’s also a very funny one, as those who have seen her standup routine at the “Friends of Celi” fundraiser can attest. Megan and Eddie started hosting the event in 2009, and it has raised more than $185,000 for CHOP’s Center for Autism Research. The Schmidts have also participated in the Eagles Autism Challenge, an annual run/walk and cycling event that benefits autism research and programs.

Megan says the decision to support CHOP was an easy one. “CHOP is everything to us. I always describe it as ‘the loveliest place on earth.’ If you have challenges, you wouldn’t want to be anywhere else.”