Choosing whether your child should undergo surgery to disconnect a part of their brain is a decision most parents never imagine having to make. But that's where Colleen and Jordan found themselves less than a year after their daughter was born.

While pregnant the couple learned their daughter Ava had an arachnoid cyst, a fluid-filled sac, located in the right side of her brain. Three months after Ava was born, she underwent surgery to have the cyst removed at a hospital in Syracuse, N.Y., about an hour’s drive from her family’s home in Binghamton. It was supposed to be a fast experience: surgery followed by one night in the hospital, then back home the next day. But there were complications.

The right side of Ava’s brain was injured during the surgery, which rendered her unable to move the left side of her body. After surgery, Ava came down with an infection, so she needed to stay in the hospital another night. That night, she had a seizure.

The first of many seizures

Colleen and Jordan were initially told the seizure was an isolated incident due to the stress of the surgery and the infection. But it would turn out to be the first of many. It took about five days for the physicians to get the right medication dose to stop the seizures. During that time, her parents learned that in addition to the arachnoid cyst, Ava had agenesis of the corpus callosum, a rare condition in which there is a complete or partial absence of the white matter connecting the two hemispheres in the brain.

After 10 days in the hospital, Ava was discharged home on anti-seizure medication. Then, two weeks after discharge, she experienced a very particular seizure-like episode: Her left arm and leg extended and became very stiff and her eyes rolled up and to the right for about three seconds, and then she relaxed. She repeated this pattern of stiffening and then relaxing five or six times for 30 seconds.

Terrified, Ava’s parents rushed her to their local emergency room. After examining her, the ER physicians said Ava needed to see a pediatric neurologist, but there were none nearby.

Colleen’s brother, who works in the medical field, suggested Children’s Hospital of Philadelphia (CHOP). CHOP’s Division of Neurosurgery and Pediatric Epilepsy Program teams are comprised of world-renowned experts who specialize in the care of children with epilepsy and seizures. 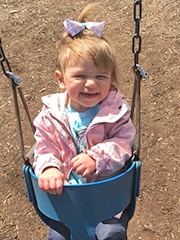 For the next year, the team at CHOP, led by pediatric neurologist Marisa Prelack, MD, worked tirelessly to figure out what was going on in Ava’s brain. They tried every treatment known to control her seizures — from corticosteroids and anti-seizure medications to the ketogenic diet — but the episodes continued.

On average, Ava had about 20 attacks a day. Some were mild and consisted of only two spasms, while more severe attacks would last 20 minutes and consisted of about 100 spasms, says Colleen. They were agonizing for her parents to watch, and distressing for Ava.

“There were times when she would cry during or after it and it would break our hearts because we didn’t know if it was hurting her and/or if it was scary for her,” says Colleen. “It got to a point where we almost thought she could sense one coming. She would just be quiet and try to hold on to something.”

The family drove the 200 miles to CHOP for repeat EEGs every month or so. Slowly, a clearer picture of what was going on with Ava emerged. For one thing, the EEGs revealed Ava actually experienced many more seizures than what her parents saw. The CHOP team gathered enough clues to pinpoint Ava’s condition: Aicardi syndrome. This rare genetic syndrome was responsible for the episodes, known as infantile spasms, as well as the structural abnormalities of her brain. Over time, infantile spasms can lead to developmental regression and developmental delays.

The sooner infantile spasms can be controlled, the better. Dr. Prelack and CHOP pediatric neurosurgeon Ben Kennedy, MD, thought a functional hemispherotomy could be the answer. In this surgical procedure, all connections between the left and right sides of the brain are disconnected.

By separating all the connections between the abnormal half of the brain and the healthy half and brainstem, seizures that were originating in the right side of Ava’s brain would no longer be able to spread to left, healthy half, or to the muscles of the body. The majority of children who have a functional hemispherotomy experience a complete or near-complete resolution of their seizures. The family was hesitant at first, but after failed attempts with other treatments, decided to move forward with the procedure.

On the day of surgery, Ava had a seizure while waiting to receive anesthesia. It was the last one she’s experienced since. That evening, while recovering from the five-hour operation, Ava gave Dr. Kennedy a high-five, and her parents finally felt some relief.

“We didn’t expect her to be so alert and happy,” says Colleen. “It was a hard decision to make, but we are so thankful we did. Ava’s team at CHOP saved her life.” 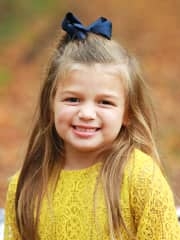 “I am extremely optimistic that Ava’s developmental gains will continue to exceed our expectations, and that seizures will only be a thing of her past,” says Dr. Prelack.

“Since surgery, she has made so many gains,” adds her mom. “It seems like every day there is something new she is doing. It’s amazing. It’s almost like the lights were turned on. She’s doing remarkable.”