When then-7-year-old Jayden came to Children’s Hospital of Philadelphia (CHOP) to meet optometrist Ayesha Malik, OD, she anticipated she would be treating a typical case of “lazy eye.”

She also knew if young Jayden and his parents, Lisa and Keith, carefully followed the treatment instructions, the blurred vision in his left eye might not become perfect, but it would get close.

“His story is like so many I’ve treated at CHOP,” Dr. Malik says. “If you do everything right, you can have a good outcome — even at a later age of diagnosis.”

Diagnosing amblyopia can be difficult 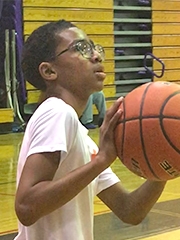 Jayden, from Philadelphia, was nearly 8 when he met Dr. Malik. When the school nurse sent home a note indicating Jayden needed to have his eyes checked, his parents immediately called CHOP. “I never thought of going anywhere else,” Lisa says.

Since arriving at CHOP in 2014, Dr. Malik has treated the blurred vision of at least 5,000 children — most of whom now see clearly. Keith says, “I felt great comfort knowing that he would be under the care of the team at CHOP.”

With amblyopia, the medical term for lazy eye, the earlier a patient is diagnosed, the easier the problem is to treat, usually with prescription glasses and patch therapy. But first, amblyopia has to be accurately diagnosed, and that can be tricky.

At the time the school nurse identified a possible problem, Jayden could read; he could see the whiteboard in class just fine. His affected left eye didn’t wander or turn in. “There were no signs whatsoever,” Lisa says. The reason: His right eye had been doing all the work, and doing it very well. He was getting excellent grades. What parent would question anything?

Jayden never reported a problem with his vision, because he didn’t think he had one. “‘This is how I thought it was supposed to be,’” Lisa remembers him saying.

For Lisa, the day of his diagnosis was a shocker.

“Dr. Malik turned the lights down in the exam room. He was told to read the letters on the eye chart. He couldn’t make them out while his right eye was covered, even when she made the letters larger and larger. I was sobbing,” Lisa recalls. Lisa says the tears stemmed from guilt. “I am up on what my kids need,” she says. “I didn’t know.”

It was a typical parental response, Dr. Malik says. Sometimes she asks her new patients, “Which eye is weaker?” “Many times the child points to the correct one. While this is normal for me, it is crushing to the family because they wish they had seen the signs earlier.”

Amblyopia is an eye-to-brain pathway problem that occurs due to one of three conditions: strabismus (eye misalignment), refractive error (blur caused by unfocused vision, particularly when one eye is more unfocused than the other), or deprivation (caused by cataract or a droopy eyelid that blocks light coming into the eye).

Whatever the reason, the eye’s neural pathway goes unused and, like an unused muscle, gets progressively weaker. This lack of visual input is especially detrimental from birth to age 8, the most sensitive years for visual development. If left untreated, the eye can lose its optimal function. The older the child is at diagnosis, the more difficult it is to correct the affected eye. Why? First, with age the neural pathway becomes less flexible to developing, and second, an older child might not be happy about cooperating with the treatment plan.

Can amblyopia be corrected?

Treatment for amblyopia starts with the child wearing glasses full time. They have a follow-up visit a few months later to see whether patching therapy is required. Glasses, with impact-resistant lenses, also help protect the better-seeing eye from injury. If a patch is needed, it is placed over the good eye for a few hours a day to give the weaker eye time to build a neural pathway with the brain. The hope is the vision will improve overtime. The child’s progress is followed closely every few months.

Some children get frustrated during patching because, with their good eye covered, their world is suddenly blurry. Some even refuse to wear the patch or rip it off.

But not Jayden. He complied so well, Dr. Malik says, that his vision, with corrective glasses, is now symmetric at 20/20 in each eye.

A thorough eye exam and patching for amblyopia

New families scheduled to see Dr. Malik should expect their child to receive a comprehensive eye exam during an approximately two-hour appointment, which will include dilating the eyes.

In Jayden’s case, Dr. Malik determined his level of amblyopia was mild to moderate. She prescribed glasses and, when his vision was better a few months later but still not equal in both eyes, she started patching therapy.

He continued to wear the glasses full time and then wear a patch two hours a day, but only at home. Her rationale: Patching shouldn’t interfere with schoolwork.

"Patching is like exercise and requires commitment and effort,” Dr. Malik says. “Jayden was a good sport and certainly was able to achieve and maintain results in the years since I have been following him."

Educating families is essential to success of treatment

Dr. Malik and her team invest the time up front, explaining everything to patients and families, and answering their questions. “It is essential for parents to have a good understanding of the condition and treatment plan before they can expect the child to comply with the therapy,” Dr. Malik says.

“Dr. Malik has always been really good with Jayden,” Lisa says. “She explains what needs to be done in language he understands.”

After 5 months, Jayden completed the patching therapy and achieved remarkable results. His vision, with glasses, is now 20/20 in each eye.

“I just remember being so proud of him, and Dr. Malik making a big deal of it,” his mother says of Jayden’s cooperation and progress during treatment. “He moved down the chart so quickly in terms of being able to read smaller letters.”

And he’s playing his beloved sport, basketball, a bit better, too. “Yes,” says Lisa, “his shooting has improved along with his eyesight.” 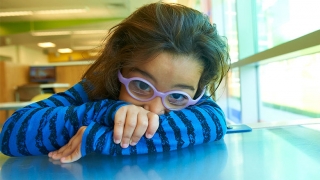 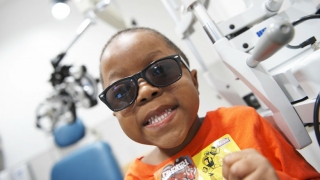