Jack, 12, was diagnosed with celiac disease and is adjusting to life without gluten. His family appreciates Children’s Hospital of Philadelphia’s thorough approach to making the diagnosis and the support they have received in making the transition to gluten-free eating. 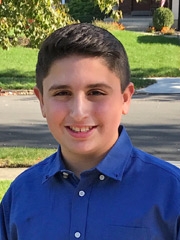 The first signs of Jack’s stomach problems started when he was 4 years old. He would often throw up in the night, interrupting his sleep. Despite countless tests and appointments, doctors couldn’t figure out the cause. It wasn’t until he was 8 years old that an endoscopy showed signs of damage to the lining of his intestine, a possible indicator of celiac disease.

Celiac disease triggers an immune reaction when the body is exposed to even tiny amounts of the protein gluten, which is found in wheat, rye and barley. Continued exposure can damage the nutrient-absorbing villi that line the intestine.

Celiac disease can be extremely difficult to diagnose, and clinical experts use a variety of tools to diagnose the condition. In addition to the endoscopy, Jack had blood tests to look for indicators of inflammation. While the endoscopy showed tissue damage, the blood test came back negative.

Jack’s parents, Kari and Jordan, began to look for information about hospitals and doctors with special expertise in diagnosing and treating celiac disease in children. Their research led them to the Center for Celiac Disease at Children’s Hospital of Philadelphia (CHOP).

At their first appointment, Ritu Verma, MBChB, looked at the lab reports and reviewed the family’s history. She suggested additional blood tests to confirm if the results from the earlier labs had been accurate.

The new tests also came back negative. With inconclusive results, Dr. Verma recommended that the family bring Jack back to the center for follow-up tests to watch for the emergence of the disease. In the meantime, Jack was encouraged to eat a normal diet, including foods with gluten. Although Jack potentially had celiac disease, he wasn’t displaying symptoms and he was growing well.

Jack returned for visits with Dr. Verma, but the tests for celiac disease continued to be negative. But when Jack was 12, the blood tests came back positive — Jack now had a conclusive diagnosis of celiac disease.

Going gluten-free for celiac disease is a significant step, requiring changes in how a family prepares food at home and what food they keep in their kitchen. It also limits options for eating outside the home, so families need guidance on how to navigate these lifestyle changes.

Kari and Jack went to an information session at CHOP, led by a dietician with expertise in celiac disease, where they learned how to read food labels for ingredients with gluten and how to prepare appetizing and nutritious gluten-free meals. The Center for Celiac Disease at CHOP has a multidisciplinary approach to care. In addition to seeing physicians, patients and their families are provided with additional support and resources. The support team includes dieticians, behavioral health professionals, nurses, social workers and child life specialists.

They also learned how to avoid cross-contamination of food. Celiac disease is an auto-immune disorder, not a food allergy, and even the smallest amounts of gluten can trigger the same immune response and inflammation as a full portion. The family learned that they needed to replace utensils like cutting boards, wooden spoons, and items that absorb flavor, as even those trace amounts of gluten can trigger an immune reaction.

Some of the biggest challenges early on for Jack were social ones. One day he was out with friends, and they went into a pizza shop. “I realized I couldn’t eat anything there,” he says.

Jack misses some particular foods, including panzerotti, which is like a small, fried calzone — it used to be one of his favorites. But he’s discovering new treats to look forward to, and new places he can eat out, including a burger restaurant with an especially good gluten-free bun.

Kari packs lunches for Jack to bring to school, and contacted the school nurse to arrange for Jack to keep a supply of gluten-free snacks in her office so he can stop in whenever he needs one. Kari is also looking ahead to the schedule of bar and bat mitzvahs that flood the social life of 12-year-olds in their community, and wondering how she can make sure Jack will be able to attend and have food that won’t make him sick.

But she’s confident it will work out. “Jack is very outspoken, and not shy about standing up for what he needs,” Kari says. And she is reassured to have the expert team at CHOP backing them up with advice and real-life tips to make going gluten-free easier.