Molly, 5, is a happy, active little girl, who likes to play soccer and dress-up. She has a big appetite, and has learned to pay attention to what she eats since being diagnosed with celiac disease. The Center for Celiac Disease at Children’s Hospital of Philadelphia has played an important role in helping her family navigate eating on a gluten-free diet.

When Molly was 2 years old, her mother, Katie, was diagnosed with celiac disease. The condition triggers an immune reaction when the body is exposed to even trace amounts of the protein gluten, which is found in wheat, rye and barley. Continued exposure to gluten, even when a person feels no sensation indicating a reaction, can damage the tissue lining the intestines.

Katie adjusted her diet to eliminate gluten, and took steps to reorganize the kitchen to keep her gluten-free food separated from the food the rest of the family ate. She used separate knives, cutting boards, and kitchen utensils in preparing meals for her family.

Testing the children for celiac disease

On the advice of Katie’s doctor, she and her husband, Jim, also had their children tested for the disease, as it is a genetic condition. Her pediatrician recommended the Center for Celiac Disease at Children’s Hospital of Philadelphia (CHOP) for screening.

Both Molly and her big sister, Aubrey, had blood tests to check for inflammation, and endoscopies to look for signs of tissue damage. Molly was 3 when tests showed that she also had celiac disease. Her sister’s tests were clear, showing no sign of the disease.

Katie was already familiar with the disease and had learned how to protect herself from exposure to gluten. Now Molly needed to be protected in the same way.

Leaning to raise a child gluten-free

Katie and Jim brought Molly to an “orientation” at CHOP on managing celiac disease. Even though Katie had been living gluten-free for a year, she found the session helpful in how to approach caring for Molly.

“Having a child with celiac disease is different from dealing with it yourself,” she explains. Katie looked out for herself in managing her disease. Molly needed to depend on her parents and the other adults in her life to provide food that was safe for her, and to steer her to new eating habits.

Since Molly was so young, she wasn’t fully aware of the change, or the foods she was missing, so the transition wasn’t as difficult as it might have been otherwise. “She’s a very happy, very easy-going kid,” says Katie. “Even at that age, Molly was very good about it. She would check with me to make sure a food was OK. And her older sister watches out for her.”

Finding a balance for the whole family

At first, Katie tried to make the entire household completely gluten-free, but sometimes they make some exceptions. One is with pasta. For those meals, Molly and Katie have gluten-free pasta and the others do not. The two batches are cooked separately and drained in separate strainers. Another is fajitas. Katie and Molly have tortillas made from corn meal, and the others have regular tortillas made with wheat flour, which hold together better.

“We are very careful,” says Katie. Gluten-free food is on the top shelf, above the food with gluten, so that crumbs and dust with gluten don’t drift down and cause contamination. In the refrigerator, everything is bagged and kept separately. “We have bowls that are just for the gluten-free food. We clean up after each step as the food is prepared, and right after we are done eating. We wash hands constantly.”

The family doesn’t eat out often. “It’s a pain to find the places that are safe,” admits Katie. But they have found some places they like when they need a break in routine. Molly really likes a particular restaurant which has good gluten-free hamburger buns.

Adapting as the family grows 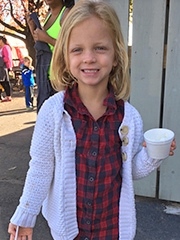 As Molly gets older, she’s becoming more aware of the food she can’t eat, and it’s becoming a little harder for her. She sees what she’s missing and sometimes she gets frustrated that she can’t have it. She’s also entering the age when birthday parties become bigger and more frequent, so she is starting to deal with the experience of having separate food at social events.

The Center for Celiac Disease at CHOP plays an integral role in helping the family manage Molly’s condition. The center has a multidisciplinary approach to care. In addition to seeing physicians, patients and their families are provided with additional support and resources. The support team includes dieticians, behavioral health professionals, nurses, social workers and child life specialists.

The center offers training and education resources, including support groups, run by the center’s director, gastroenterologist Ritu Verma, MBChB. Patients’ families are encouraged to participate in support groups and share challenges and ideas and bring in new foods for others to try. The center also sponsors an annual education day featuring samples of gluten-free foods.

“The whole team at CHOP has been very helpful, and wonderful with the kids. It’s a long-term relationship.”

Molly’s condition is checked at regular appointments, and her older sister is retested annually to make sure she hasn’t developed any signs of celiac disease. And now there is a third child in the family, 2-year-old Kelsey. She’s still too young to be tested, but when the time comes, she will also meet the team at the Center for Celiac Disease.

Molly, now 5, is thriving. She was small as a baby, but is now in the middle of the growth curve for height. She likes to play soccer and do gymnastics. She also loves imaginary games, dress-up and drawing. “She’s a very active girl,” says Katie. And a hungry one. “She eats all the time.”