Jack had a heart defect called tetralogy of Fallot that needed immediate surgical correction. He was rushed to The Children's Hospital of Philadelphia, along with my dazed husband.

At 13 hours old, Jack had open heart surgery to fix just one part of his heart defect. His recovery was complicated by intestinal problems, low muscle tone, apnea (irregular breathing) and a calcium deficiency.

At seven days of age, Jack was moved to the pediatric intensive care unit where he remained for the next three weeks. The staff at Children's Hospital were a great comfort to us. Just past his door were other families with sick children. We shared an unspoken understanding and compassion between us, whether we chatted about our circumstances or about the weather.

Jack was nine days old when the Genetics team came to speak with us about chromosome 22q11.2 deletion.

We listened without really hearing them. I think we were too concerned about his heart, his breathing and his inability to eat. We just wanted to bring Jack home, and we'd read the stack of literature later. And read we have!

On Aug. 24, 1998, with instructions and medications in hand, we ever-so-slowly drove Jack home, praying that the monitor wouldn't go off before we reached the front door.

We spent the next five months just making sure he was breathing, administering his multiple medications, and staring at him.

On his five-month birthday, Jack had a second cardiac repair to patch the hole between his two ventricles. Again, Children's Hospital doctors, nurses and staff were wonderful.

Our 1999 New Year present was a successful procedure and permission to take Jack home. Jack bounced back fairly quickly, then battled a respiratory virus for two months after the surgery.

At home, he began early-intervention services at about 6 months.

Jack's primary intervention was with a physical therapist. She had weekly team meetings with the other therapists including a speech pathologist, an occupational therapist, a nurse and a special education teacher. All consulted with our primary therapist and made visits to our home as needed.

The therapists observed Jack in his home environment with his own toys and family members. The therapist usually had ideas that I could easily incorporate into his day.

It was the first time that I was the one getting — rather than giving — advice. I'm a reading specialist/elementary education teacher who immediately thought she could handle all of Jack's challenges. I failed to understand the breadth of his problems. These therapists were so patient, loving, considerate and accommodating to Jack and to his overzealous parents!

Jack had two heart catheterizations after his second surgery. The first, five months post-op, was to check the patch and balloon the right pulmonary artery, which was narrowing. The second, seven months after the first, was to check the narrowing area again.

We again applauded the staff of The Children's Hospital. We thank God for our proximity to Philadelphia, because the hospital has been a great comfort to us.

In fact, the leading research on chromosome 22q11.2 deletion is conducted there. Genetic disorders are gaining public recognition through the Discovery Channel's feature on Children's Hospital and ongoing news stories about genetic research.

Jack will be 5 at the end of July. He does not yet speak, is globally developmentally delayed, and uses sign language to communicate with us. Jack can hear everything we say, but cannot always process language effectively.

He receives services at school, including speech, physical, and occupational therapy and special education. The school staff has been wonderful with Jack. How could anybody resist his golden blonde hair, big blue eyes and charming smirk?

We are blessed with a son who is funny, happy, strong, stubborn, affectionate, lovable and sweet. In the hustle of the busy day, my husband and I try to remind each other to focus on Jack's positives and not get bogged down with his disabilities. I would be lying if I said that is easy, but we try.

Jack has a little sister, Maggie, who is 21 months old, and they are good playmates and friends. Like any two siblings, they test each other's limits as well as mom's and dad's. Now, when Maggie strolls into Jack's classroom with me to pick him up from school, Jack gets jealous when the other children talk to her. Let's hope her big brother will be kinder to her first date.

We have learned as much as we can about DiGeorge syndrome over the past four years. We've joined support groups and email lists. We've gone to conferences, waited in countless doctor's offices, and read piles of literature.

Through it all, we've learned that parents need to be their child's advocate.

Don't wait for a doctor, teacher or other service provider to give you what you need to help your child become the best person possible. Keep reading and enjoy!

Written by Jack's family
Originally published: June 2009
* Names have been changed to protect the patients' privacy. 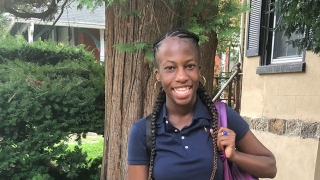 Jasmine, 14, is thriving thanks to early intervention and continuing treatment and support from CHOP's 22Q and You Center.