When Haley was in high school, she suffered debilitating migraines. After a concussion, the headaches got even worse, causing significant difficulties with daily functioning that interfered with her education. Thanks to a personalized treatment plan from the Pediatric Headache Program at Children’s Hospital of Philadelphia focused on helping her function with her symptoms, Haley was able to earn her high school diploma and get back to living her life. Now 22, Haley is entering her senior year at the University of Pennsylvania. 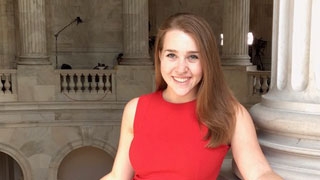 Haley was 13 when she suffered her first migraine. Migraines are severe and disabling headaches accompanied by nausea, dizziness and sensitivity to light and sound that can last for hours or days. Migraine pain is individualized, so what helps one person may not work for another.

About a month after her first migraine, Haley woke up one morning with a dull pain over her right temple and eye. The pain never went away completely, and certain activities would turn it into a full-blown migraine.

For the next two years, Haley saw many doctors and tried dozens of different medications as well as alternative therapies like acupuncture and biofeedback. Nothing worked.

At 14, Haley decided to stop looking for a cure and focus on living her life. Haley joined her school’s cheerleading squad, acted in the school musical and “had somewhat of a normal high school experience for a bit,” she remembers.

That changed at a cheerleading competition midway through her sophomore year when Haley suffered a concussion, a mild traumatic brain injury that can intensify and prolong migraine headaches in those who suffer both.

The mix of post-concussion symptoms and migraine headaches was so severe that Haley was constantly missing school. She experienced debilitating migraine headaches four or five days a week and spent the majority of her time at home in bed, often with the lights out and ice on her head. At one point, she was hospitalized for a week because of persistent vomiting.

Nine months after the concussion, Haley had her first Botox injection, a relatively new therapy at the time for preventing migraines. The treatment broke the cycle of daily migraines, but the headaches were still incapacitating.

Until then, Haley had primarily been treated at a headache clinic for adults, though they did travel out of state to see a pediatric headache specialist. While Haley’s local doctors were committed to treating her headaches, they didn’t have the experience working with children with severe headaches. Lisa made an appointment with Dr. Szperka immediately.

“We were thrilled, because there are things that you need a pediatric specialist to do when you have a complex headache disorder and you’re a child,” says Lisa. “You’re not just a little adult.”

Finding relief and a path forward

Working with Dr. Szperka, Haley tried different combinations of medications and techniques to find pain relief and help her get back to living her life. Together, they created a plan to help Haley tackle a major goal — to finish her high school education.

Haley signed up for classes for high school credit at nearby Villanova University, employing strategies to overcome her limitations. She recorded each lecture so she could listen at home in smaller chunks of time when she lost mental focus in class. She used text-to-speech software because reading triggers her migraines. She also spread her part-time classes out throughout the week so she wouldn’t feel overloaded.

The techniques worked and Haley earned enough credits at Villanova to receive her high school diploma. It was a breakthrough moment.

Next, Haley set her sights on college. Instead of taking the SATs, a nearly four-hour test, she opted for the ACTs, which allowed her to spread the exam over a three-week period.

In 2013, nearly three years after being knocked on the head at the cheerleading competition, Haley was accepted early decision into University of Pennsylvania.

One step, one symptom at a time 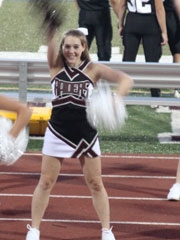 Now 22, Haley is entering her senior year at the University of Pennsylvania.

Before leaving for college, Haley attended CHOP’s REACH for College workshop for high school students with chronic illnesses. The program focuses on the medical and social aspects of a successful transition to college. Later, she became a presenter/mentor for the program, sharing her own experiences to help others make the transition.

Still, Haley’s first semester was a big adjustment. Because there is no set formula for managing chronic migraines, she needed to learn how to juggle her illness with the demands of college life, and figure out what worked for her. Over time, she got better at setting priorities and keeping herself healthy.

“There’s lower-case ‘better’ and capital B ‘Better,’” says Haley. “I don’t spend a lot of time thinking of capital B better — the cured version — but the version that means improved or managing one kind of symptom better. That kind of better I’m always working toward.”

In the fall, Haley will enter a dual program, which will allow her to earn a master’s degree in social policy along with her bachelor’s degree in communications and public service. She plans on a career in health policy. Her hope is to help connect others to the resources that will help them live their lives to the fullest, as she has. 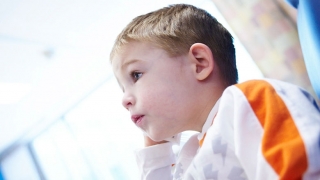 Learn what you and your child can expect before, during and after an appointment with the Pediatric Headache Program. 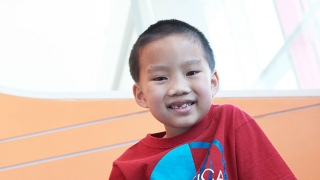 Why Choose Us for Headache Treatment

Our Pediatric Headache Program offers a specialized team of experts, an innovative and collaborative approach to treatment, and a full range of treatment options.