Steve and Jill Bair know — and appreciate — every one of the 125 miles between Scranton and West Philadelphia. They and their two children, Charlotte and Michael, spend five to six hours in the car for quarterly trips to Children’s Hospital of Philadelphia (CHOP). 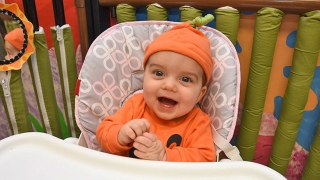 Michael, 9 months The long trips are worth it because CHOP’s Adrenal and Puberty Center provides expert care for their children with congenital adrenal hyperplasia (CAH), a rare disorder of the adrenal glands. Both Charlotte, 2, and Michael, 9 months, have CAH, which requires daily medications and quarterly check-ups to ward off potential health and growth problems.

The knowledge generously shared by Maria Vogiatzi, MD, Director, and Michelle McLoughlin, MSN, CRNP, CPNP-AC, a nurse practitioner in the center, have made understanding and managing their children’s lifelong condition just part of their daily lives.

“I really don’t know where we’d be without them,” Jill says. “They’re very reassuring, very calm. If I’m freaking out because one of the kids is having an emergency, I can call them and they walk me through the steps. They’ll tell me, ‘You’ll be fine and they’re going to be great.’ It’s a huge relief to know they’re there for us.”

Charlotte and Michael were diagnosed soon after birth with classical CAH, the most severe form. Their bodies don’t produce any cortisol or aldosterone. Both are needed to regulate basic bodily functions like blood pressure and blood sugar levels. (Nonclassical CAH is milder and often not diagnosed until childhood or even adulthood.) Cortisol is also needed to help their bodies respond to illness or injury. They take hydrocortisone and fludrocortisone daily to replace the cortisol and aldosterone.

But when an injury or illness happens, Steve and Jill must give them extra medication, called stress doses, to keep them from going into adrenal crisis, a life-threatening condition that requires immediate treatment, usually with an injection or infusion of hydrocortisone. The tricky part is determining “what’s a normal baby thing or what’s a CAH thing,” Jill says. “It was particularly hard with Charlotte since she was our first baby and we didn’t know what to expect.”

Like most people, Jill and Steve had never heard of the condition before Charlotte was diagnosed. She was born six weeks early at Moses Taylor Hospital in Scranton, PA. Doctors had known something was amiss because Charlotte was born with some physical abnormalities that can occur in girls with CAH. Newborn screening blood tests confirmed her diagnosis.

Charlotte spent 10 days in the NICU in Scranton to get stabilized on the proper doses of her medications. “The doctors in Scranton knew they weren’t the experts and referred us to CHOP,” Jill says. “We had our first visit with Dr. Vogiatzi when Charlotte was 6 weeks old.”

A cystoscopy at CHOP revealed Charlotte had significant internal abnormalities due to the hormonal imbalances in her body during gestation. With her “plumbing” out of place, she experienced frequent urinary tract infections (UTIs), which in turn required stress dosing of her CAH meds. Urologists Thomas Kolon, MD, and Mark Zaontz, MD, created a plan to make all the repairs in one operation. Charlotte was 1 when she had the surgery.

“Our CHOP surgeons were exceptionally prepared and skilled,” Jill says. “It went really well, and we went home the next day. She hasn’t had a UTI since.”

Charlotte’s reproductive future is also positive. “She healed really well,” Jill says. “As far as we know, she will be able to get pregnant and have kids someday just like anyone else. It’s amazing she has this possibility.”

25 percent chance CAH with each pregnancy

When Charlotte was 9 months old, Jill found out she was pregnant again. CAH is a recessive genetic disorder, which means both parents carry one gene with the trait even though they don’t have any symptoms of the condition. With each pregnancy, there’s a 25 percent chance the child will inherit the disease.

Steve and Jill opted against prenatal tests to find out if their second child would have CAH, since knowing wouldn’t change the course of the pregnancy or treatment. She did push to get the results of the typical newborn screening expedited. “I did not want to leave the hospital without knowing,” she says. The tests came back positive for Michael.

“This time was a lot easier, because Michael was our second baby and second time around with congenital adrenal hyperplasia,” Steve says. “We were much more confident knowing what to watch for when it came to an adrenal crisis.”

And if the family does need to bring one of the kids to the local emergency room, Vogiatzi and McLoughlin are a phone call away to consult, if needed.

Jill has altered how she gives medication, implementing alternatives she’s picked up over the last two years. Instead of crushing pills and putting them in milk or food — which requires the child to eat or drink the whole portion to get enough medicine — she cuts them in half, puts a half in the back of Michael’s mouth and gives him a drink. She repeats with the other half of pill.

“It’s so much easier,” she says, “and causes less worry for me because I know he has the full dose.”

Both children have salt-wasting CAH, which means they don’t secrete enough aldosterone, making it impossible for them to maintain an adequate amount of salt in their bodies. Without salt, they could become severely dehydrated, leading to a host of complications. To offset this, they must take fludrocortisone replacement and extra sodium each day.

For younger children, the traditional form is salt tablets until they’re eating enough solid foods and liberal salting each meal gives them the sodium they need. But instead of a tablet, Jill opts for a sodium solution mixed by her pharmacist that she puts in Michael’s bottle.

“If he doesn’t drink it all at one feeding, he can finish it next time,” she says. “I’m lucky. He’s a good eater and it doesn’t bother him, even though it seems very, very salty to me. It’s a successful approach for us.”

What’s next: a bright future 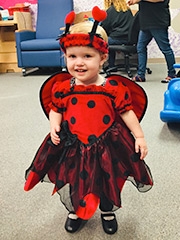 Charlotte, age 2 As they’ve learned to adapt during the first two years of their CAH journey, the Bairs will continue to give Charlotte and Michael the most typical childhood they can.

“Maybe playing football isn’t the best choice — the hits would mean constant stress doses — but there are other sports,” Jill says. “CAH is treatable. They can live a normal life.”

The quarterly appointments at the Adrenal and Puberty Center have a lot to do with their normal life. Vogiatzi and McLoughlin evaluate their blood work to determine if medication doses need to be adjusted. They are also weighed and measured since both children are at risk for suppressed growth if they take too much hydrocortisone, or precocious puberty if they take too little. Both can lead to the children failing to reach their full height.

These days, Charlotte is figuring out that Michael is a potential playmate. “Charlotte loves books, and she’s always pretending to read. Now she ‘reads’ to him,” Jill says.

“It’s cute to watch them. He loves it when she gives him a kiss.”

And further in the future? “My hope for them, as knowledge of CAH grows and there’s more research, that there will be more treatment options,” Jill says.

In the meantime, they’ll make the trip from the Poconos to Philadelphia, where they’re confident Charlotte and Michael are getting the optimal care. “CHOP sure spoils you,” Jill says.